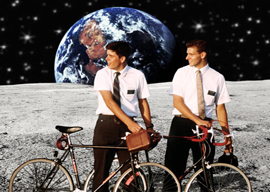 America’s Great Weird Religion hit Manhattan’s Great White Way last Thursday night as South Park‘s Trey Parker and Matt Stone premiered their musical The Book of Mormon to rapturously rhapsodic rave reviews. The Mormons” arrival on Broadway”even as objects of ridicule”signals they”ve “arrived” in pop culture. They”re mainstream enough to have a whole Broadway musical devoted to them and sufficiently good-natured to tolerate the sort of satirical pummeling that many world religions (and all tiny cults) would never allow. To date, there have been no reports of Mormons planting car bombs in Times Square.

Despite the fact that it gleefully eviscerates many of Mormonism’s more esoteric doctrinal idiocies, from all accounts The Book of Mormon oozes with sweetness and even respect for Mormon culture. Parker and Stone collaborated with Robert Lopez on the book and score, and all three have remarked with wonderment on the relentless cheeriness of the Mormons they”ve met.

It is this nearly unbearable level of smiley-faced reasonableness, this naÃ¯ve thermonuclear squareness, that makes Mormons funny. Given the right acoustics, Mormons are so squeaky-clean that you can actually hear them squeaking. Except for the part about being business and organizational geniuses, they encapsulate everything the cosmopolitan coastal media tend to mock about flyover country and the silly benighted goyische gnomes therein. In a rigidly defined cultural crayon box where white is the only color you can have “too much” of, Mormons catapult high over the snowcapped Rocky Mountains through clouds made of bleach, soaring beyond Whiteville into some blinding Ãber Weiss paradise, a land so white that snowflakes stain your angel wings, an American Zion of unmitigated wholesomeness where towheaded cherubim eat sugar cookies and ancient patriarchs with 40-foot-long silver beards have 80 wives and 4,000 grandchildren and where guys named Marlin and Dallin and Wilford and Taft and Potter and True say “fetch” and “flip” and “darn” instead of cuss words and the Osmond Brothers perform “Crazy Horses“ 24 hours a day throughout eternity and no one ever gets annoyed because they”re too busy grinning as they hand out vanilla-frosted cupcakes to the poor.

“Given the right acoustics, Mormons are so squeaky-clean that you can actually hear them squeaking.”

In terms of cultural style, it’s hard to think of anyone less Jewish than the Mormons. Still, Mormons consider themselves the modern “House of Israel,” while others have compared them to Jews in ways that aren”t so nice.

Give or take a few stragglers and apostates, there are roughly as many Mormons in the USA as there are Jews. Same goes for the world. And just as Jews have perennially faced accusations of covert attempts to rule the planet, so have the Mormons. As far back as their early settlement in Nauvoo, IL, Mormons were accused of purposely maintaining a sense of self-interested separateness that caused them to “dominate community, economic, and political life wherever they reside.”

In 2008, The New York Times” Noah Feldman commented on the “systematic overrepresentation of Mormons among top businesspeople and lawyers.” In 2009, the Atlantic boldly asserted that Mormons are “overrepresented in the national political elite.” Slate‘s Jacob Weisberg transgressed the bounds of religious tolerance to tag Mormon prophet Joseph Smith “an obvious con man.”

Yeah, it takes a swindler to say you dug up and then transcribed ancient engraved golden plates from God”and a gullible idiot to believe it all”but do we really want to get into the plausibility of Moses tiptoeing down from Mt. Sinai with divinely engraved stone tablets? Let’s apply our “con man” charges with a sense of fairness and equity, shall we?

As with die Juden, die Mormonen also share a sense of isolation and persecution. Joseph Smith complained that other Christian sects were “all united to persecute me.” Mormons were so unpopular in Missouri that in 1838 Governor Lilburn Boggs issued a military order that they “must be treated as enemies, and must be exterminated or driven from the state, if necessary, for the public good.” This little known Missourian “Final Solution” for the Mormon Question was not rescinded until 1976.