The Motor City Blows its Pistons 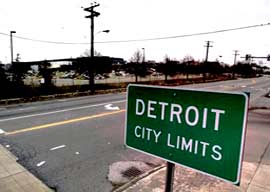 Detroit, a city once known as “The Paris of the West” and “The Arsenal of Democracy,” has fallen and it can’t get up. In 1960 it boasted the nation’s highest per-capita income; now it has the highest quotient of low-income residents of any large American city.

Last Thursday in federal court, the city filed the largest municipal bankruptcy case in American history, with unfunded debts estimated at around $18 billion. On Friday a Michigan county judge ruled against the filing, claiming it violated the state constitution and was “not honoring” President Obama, who during the last election cycle boasted that he “refused to let Detroit go bankrupt.”

“What turned Detroit into ‘Detroilet’? What enabled this once-mighty metropolis to pluck defeat from the snatch of victory?”

The urban leper colony known as Detroit is a living/dying metaphor of American municipal decay. In 1950, it hosted nearly two million residents; now it can barely cling to 700,000. And one poll showed that of the remaining residents, forty percent claim they plan to flee the city within the next five years. Nearly half of Detroit’s street lights are broken, average police response time is about an hour, and it is currently ranked as America’s second most dangerous city. And modern Detroit is not exactly teeming with what a sane person would call high-quality human capital.

So what happened? What turned Detroit into “Detroilet”? What enabled this once-mighty metropolis to pluck defeat from the snatch of victory?

MSNBC’s Liberal Denial Machine is blaming Republicans for the city’s downfall, despite the fact that Detroit hasn’t had a Republican mayor since 1962 and there has been only one Republican on the Detroit City Council during the last four decades. Still, despite such uncomfortable facts, Melissa Harris-Perry blamed the city’s woes on small government and “what Republicans would impose on us.” The jowly sack of flatulence known as Ed Schultz blamed Detroit’s decline on “a lot of Republican policies.”

Salon.com, which has fallen off the deep end of the progressive tugboat into a bottomless ocean of cognitive dissonance, published an article initially called “White People Killed Detroit” that was later amended to “Who Killed Detroit?” That old bugaboo known as “white flight,” which involved Caucasians fleeing a once-thriving city in the wake of vicious riots, escalating crime, and felonious black-nationalist mayors, was pinned on white bigotry rather than black behavior. The fact that the Detroit metropolitan area now resembles a whitebread donut with a solid-chocolate filling was blamed on the whites that left rather than the blacks that stayed. The uncomfortable fact that the white suburban areas began to prosper while the black urban core started to rot was blamed, oh, but of course, on white people. Progressive philosophers urged that the suburban areas should be forced to merge with urban Detroit in order to halt the city’s seemingly insoluble downward spiral.