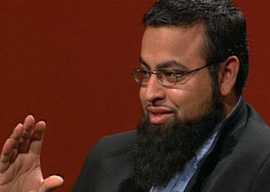 Imam Shahid Mehdi”interpreter of Islamic law, respected Muslim scholar, and former lingerie salesman”is a Denmark-based mufti who managed to outrage both the left-wing Unity List Party and the right-wing Danish People’s Party in his host country by stating in a televised interview that Danish women are “asking for rape“ if they walk the streets uncovered:

But Imam Mehdi chose to go a step beyond mere verbal approval of sexual assault. To illustrate his point, he decided to practice a little “Islamic outreach” on his own time to drive his arguments home:

Mehdi is accused of pulling his penis out and chasing a 23-year-old woman around in a park in MalmÃ¶ in August 2012, according to the court in MalmÃ¶.

The details of the case read like some deranged outtake from an episode of The Benny Hill Show:

She bent down to pick up her dog, when the man asked about her name. She just had time to respond before the man opened his pants and took his penis out, while she was still bent down so that his penis was half a meter from her head.

“It’s refreshing to see a feminist openly admit to feeling a kinship with religious fundamentalists.”

The woman got up and ran away, and when she looked over her shoulder, she saw that the man followed her, she told police. The man gave up his project, and disappeared into some bushes.

The randy Imam is said to be respected for his knowledge of Islam. I”ll have to assume he was observing some lesser-known Koranic hadith that reads, “He who talks the talk must also walk the walk.” He also appears to be adept at the fashionable Western cultural practice of distracting one’s opponent by shouting “racism!” when one is caught”quite literally, in this unfortunate instance”with one’s pants down:

The woman managed to get away, and she called the police, who arrested the man a few minutes later. During the interrogation he refused to plead guilty and believes that the accusation is based on racism because he has Pakistani roots.

The same week that a friend sent me the story of the muff-crazed mufti, there seemed to be a slew of different sex-themed items in the news, all of which got me thinking about Mehdi’s inability to control himself in the presence of uncovered females:

“¢ There is a movement afoot in Iceland to ban Internet pornography altogether, presumably using the same kind of filtering technology favored by other admirable beacons of progressive liberalism such as China and Iran.

“¢ The European Union”an organization that can never resist an opportunity to legislate and regulate every damn thing under the sun”was recently looking at a proposal that would require “the EU and its member states to take concrete action on discrimination against women in advertising…[with] a ban on all forms of pornography in the media.” The unsuccessful bill was concerned with “eliminating gender stereotypes in the EU” as well as conventional pornography.