The Myth of Northern Innocence 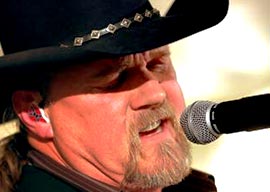 Burly-and-bearded country singer Trace Adkins ruffled all the usual feathers and bruised all the usual feelings when he dared to wear a Confederate battle flag earpiece in full view of gasping national TV viewers while singing “The Christmas Song” in the Yankee stronghold of Rockefeller Center on November 28.

Adkins, who belches out such venerable neo-country chestnuts as “Honky Tonk Badonkadonk” and “Brown Chicken, Brown Cow,” was subjected to the predictably rage-stroking vilification that comes whenever anyone suggests that the American South has ever been anything beyond a rancid cultural cesspool of lynching, incest, bestiality, racism, toothlessness, retardation, and yes, racism, even though I said it twice.

But Adkins has survived numerous disfiguring accidents in his lifetime, including a near-fatal shooting at the hands of an ex-wife, so he weathered the controversy good-naturedly and with only the slightest wisp of an apology. He is a member of the Sons of Confederate Veterans and has repeatedly referred to what is known as America’s “Civil War” as the “War of Northern Aggression,” although I”ve always preferred Granny Clampett’s explanation that the conflict resulted “when the North invaded America.”

Even though it’s estimated that every third Southern household lost a family member in that war, critics insisted that Adkins and his ilk should “get over” the Civil War and quit being all butt-hurt because they lost, though I doubt the same people ever dare encourage American blacks to “get over” slavery.

They”d also likely never encourage Steven Spielberg to “get over” the Civil War, nor to cease peddling the Christlike mythology that has emerged around its chief perpetrator, Abraham Lincoln.

Instead, such obviously unbiased propaganda machines such as the Southern Poverty Law Center and the Washington Post insist that it is only the “Neo-Confederates” and those who pathetically cling to romantic notions of the South’s “Lost Cause” who “whitewash” history and peddle myths, distortions, falsehoods, half-truths, and rationalizations because they are secretly wracked with guilt due to the fact that they are disgustingly racist and racistly disgusting subhuman sore losers who are ready to explode with vile and smelly racism at any given moment.

“I”m here to smash your myths and smear feces on your whitewashing.”

After all, it is only “racists” who are pushing an agenda, and never the victors in war. It’s not as if the winners write the history books, so kindly zap any such thoughts from your mind. And it’s not as if white male Southerners have served as “America’s niggers” since at least the 1960s or that the American South has played the role of America’s Guilt Spittoon for longer than that.

The American psyche has increasingly become driven by feminine emotion rather than masculine logic. Comforted snugly inside their fake moral cocoons, most Americans are therefore more likely to view history through the prism of guilt-projection and shaming rather than the pragmatic notion that history is essentially a power struggle over land and resources. Almost all individuals and societies appear able to function only when they can project their guilt onto others.

Well, two can play at that game.

Since guilt appears to be the only thing that works with them, I’ll stoop to their tactics and toss a huge steamin’ load of guilt right back in their smirking faces. I”ll take that Hot Guilt Potato and throw it right back at you. I”m here to smash your myths and smear feces on your whitewashing.

Here are some things you”re not likely to see on American TV or read in American textbooks.

FACT: ABRAHAM LINCOLN SAID HE WAS MORE CONCERNED WITH PRESERVING THE UNION THAN WITH ENDING SLAVERY

The transcendently homely president, a wealthy railroad lawyer and willing tool of Northern industrialists, started a war that cost the lives of at least 600,000 white soldiers and 50,000 white civilians. To put that in perspective, that’s at least 130 white corpses for every black cadaver that was lynched throughout American history.

For anyone who insists that the Civil War was about slavery and slavery alone, I force you to chew on Lincoln’s own words:

I have no purpose, directly or indirectly, to interfere with the institution of slavery in the states where it exists. I believe I have no lawful right to do so, and I have no inclination to do so. (Inaugural Address, March, 1861)

My paramount object in this struggle is to save the Union, and is not either to save or destroy slavery. (From an 1862 letter to Horace Greeley, written during the Civil War)