The Myth of Shock Value 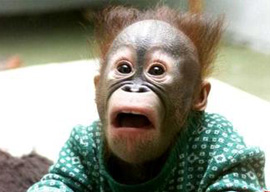 The unfortunately named Nadra Kareem Nittle recently penned a popular article instructing the ignorant about how to deal with “racist” relatives. The article was so gay that I couldn”t finish it, but it brought up a much more important question: What do you do with a family full of libtards?

If you”re a black conservative who’s sitting down with relatives for a holiday dinner, opening your mouth could lead to a lynching. Not accepting Obama as the messiah is as blasphemous as putting on a Michael Bolton record. You will be accused of doing it for “shock value.” I don”t know a lot about being a black conservative, but I do know a lot about this ridiculous “shock value” accusation. Here’s a shocker: It’s a myth.

When people use this term, I think what they”re really saying is they have become so used to being preached to by the converted, they are shocked that anyone would think differently. They are oblivious to any other opinions. It reminds me of what psychologists call “perceptual blindness,” which is the “failure by a person to notice some stimulus that is in plain sight.” As the story goes, the Indians were so confused by Columbus’s ships on the horizon, their brains refused to process the image and therefore saw nothing but water. Well, I”m sorry Injuns of the world, but those ships were real.

“I think it’s OK to be divisive if half the country is retarded.”

The shock-value accusation assumes you have appointed yourself provocateur and then take the opposite position of everyone else merely to be difficult. For example, when the Devil’s advocate hears that racism is the most sensitive issue in the country he starts a new magazine called Niggers Stink. Then he makes tons of money being outrageous. Sound plausible? Really? Who would listen to such a person? A writer who constantly blurts out offensive bullshit he doesn”t even believe is going to be ignored by everyone over the age of 11. Why would anyone bother inventing magical beliefs they don”t believe? Who has the time?

I”m told that Michael Savage used to be a liberal but became conservative because it pays more. The same goes for Dennis Miller. He was a young man in an improv troupe. When Malcolm X went from militant racist to groovy liberal, did the brothers say he was only pretending? Well, no, they shot him.

The assumption that someone is saying something merely to get a rise out of someone else is so boring it makes me want to cry. The same goes for the assumption that someone is only spouting an opinion because he’s paid to say it. Libertarians are constantly accused of sucking the Koch dick, but if your opinions are so flaccid that anyone can buy them, nobody’s going to listen. If someone was so inclined to pretend to be someone they”re not, they”d become an actor or a salesman. Being offensive isn”t lucrative. It”ll lose you clients, cost you your job, and even suck you into a soul-crushing lawsuit.

A contrarian isn”t someone who randomly chooses the opposite position. He’s someone who doesn”t shy away when the facts bring him to an unpopular place.