The Myth of the Golf Nazi 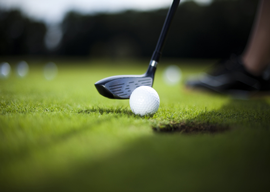 For most of history, being a hereditary aristocrat was a good job. The only catch was the old concept of noblesse oblige, which suggested that people of wealth, power, and influence were honor bound to defend the general public.

Today, however, it’s more prestigious to be a victim of the majority. That seems to release you from any nagging worries about aristocratic responsibility.

Being an actual victim, though, is still no fun. So the best thing is to be recognized as a member of a hereditary victimocracy. The president, for example, is a victim-by-blood, as illustrated by New Yorker editor David Remnick’s bestselling 2010 biography, The Bridge: The Life and Rise of Barack Obama. Remnick pleased his intended audience by interspersing thrilling chapters about heroic civil rights protestors in 1965 being beaten on the bridge in Selma, Alabama with admittedly less thrilling chapters about the young Obama building sand castles on Waikiki Beach.

One of the most popular varietals of hereditary victimocracy is to claim to be related to somebody who couldn”t get into an exclusive golf club and thus had to found his own country club.

This widespread obsession with WASP country clubs as the locus of evil in America runs throughout a 4,000-word New York Magazine article, “Barbarian at the Tee,” in which novelist Peter de Jonge recounts the mental terrors he endured sneaking on to play the old-money Maidstone golf course in the Hamptons. Here’s a representative sample:

In Frankfurt in 1938, well after ARYAN ONLY signs went up at the Opera House, my fair-haired Jewish father, then 12, kept attending performances on his own. It wasn”t a protest. He did it because he felt like it and thought he could get away with it, and I”m playing Maidstone for about the same reason.

The article ends anticlimactically, with Maidstone’s golf Nazis failing to even notice the author’s transgressive intrusion.

In his memoir, The Wolf of Wall Street, swindler Jordan Belfort”who was portrayed so energetically by Leonardo DiCaprio in Martin Scorsese’s movie”reflects upon his motivations. In a prose style he evidently developed from reading The Bonfire of the Vanities and Fear and Loathing in Las Vegas in prison, Belfort rationalizes:

The country club was remarkably close to my estate … But, of course, I never bothered applying for membership, what with my status as a lowly Jew, who had the utter gall to invade WASP heaven. And it wasn”t just the Brookville Country Club that restricted Jews. No, no, no! All the surrounding clubs restricted Jews, or, for that matter, anyone who wasn”t a blue-blooded WASP bastard. … I came to realize that the WASPs were yesterday’s news, a seriously endangered species no different than the dodo bird or spotted owl. And while it was true that they still had their little golf clubs and hunting lodges as last bastions against the invading shtetl hordes, they were nothing more than twentieth-century Little Big Horns on the verge of being overrun by savage Jews like myself, who”d made fortunes on Wall Street and were willing to spend whatever it took to live where Gatsby lived.

Rob Eshman, publisher of the Jewish Journal, noted in an interesting essay, ““The Wolf” and the Jewish problem“:

The hole in him wasn”t from poverty, but from desire for acceptance. The “blue-blooded WASPs,” Belfort writes, “viewed me as a young Jewish circus attraction.”  Belfort had a chip on his shoulder the size of a polo pony, and so did everyone he recruited. They were, he writes, “the most savage young Jews anywhere on Long Island: the towns of Jericho and Syosset. It was from out of the very marrow of these two upper-middle-class Jewish ghettos that the bulk of my first hundred Strattonites had come.”

Belfort named his pump-and-dump boiler room “Stratton Oakmont“ to imply WASP respectability. Oakmont, an elite golf club outside Pittsburgh, has hosted the U.S. Open more often than any other course. Eshman goes on:

It’s not complicated, really. Poor little Jordan wanted to show those WASPs whose country clubs he couldn”t join that he was smarter, richer, better. What he failed to understand is that just about every Jew, every minority, shares the same impulses. But only a select few decide the only way to help themselves is to hurt others. Belfort, like Bernie Madoff, is an extreme example.

The surprisingly common Jewish-American preoccupation with vague family legends of a grandfather being blackballed at a country club has led me to study up on the history of private clubs. It turns out that most of what we think we know is a retconning of American social history.

Contrary to mythos, as far as I can tell:

First, as early as 1925, a higher percentage of Jews than gentiles may have belonged to country clubs.

Third, a 1962 study by the Anti-Defamation League found that Jewish country clubs were more discriminatory than Christian clubs.

I had expected to find that traditionally Jewish country clubs don”t hold big tournaments because of residual anti-Semitism from the super-WASPy United States Golf Association and the less upscale Professional Golfers of America. But it turns out that the USGA and PGA had Jewish clubs host their major championships back in the bad old days of the 1920s and 1930s.

For example, Bobby Jones won the U.S. Open at Inwood on Long Island in 1923, and Gene Sarazen triumphed at Fresh Meadow in Queens in 1932. The PGA Championship also visited Jewish clubs in the Tom Buchanan era: Walter Hagen won at Inwood in 1921, Leo Diegel at Hillcrest (the famous movie industry club in Los Angeles) in 1929, and Tommy Armour at Fresh Meadow in 1930.

Ever since the civil rights movement turned its unwelcome attention upon the all-Jewish (and thus all-white) Brentwood Country Club in Los Angeles for planning to host the 1962 PGA Championship, it’s been hard to learn anything about the membership policies of Jewish country clubs. The highest profile tournament hosted since then by a traditionally Jewish club might be the 1997 Walker Cup (an America v. Britain amateur match named for George Herbert Walker, great-grandfather of the previous president), held at Quaker Ridge in Westchester County.

Still, we can piece together some general impressions.

One irony is that, even in the early 20th century, Jews were more likely to belong to county clubs than gentiles. According to Sports and the American Jew, in a 1925 article in American Hebrew entitled “The Common Ground of Golf,” Italian-American champion Gene Sarazen

… praised their courses as among the best in the country. Noting that of the estimated five hundred thousand golfers in the United States, more than thirty thousand were Jewish, he argued that this number, “entirely out of proportion with the Jewish proportion of the populations,” demonstrates the popularity of the sport among Jews.

Why have a higher proportion of Jews than gentiles belonged to country clubs? Because, with the possible exception of a couple of decades around 1900, Jews in America have always tended to be richer on average than gentiles. For instance, Hillcrest was said to be the most expensive club to join in the country during the Gatsby era.

Jewish clubs tend to have surprisingly dull golf courses relative to the lavishness of their facilities for socializing. The WASP urge to invest in the golf course rather than the clubhouse surprised even the Quaalude-hindered brain of Belfort. In the most memorable of the many scenes of excess essayed by DiCaprio, the self-proclaimed Wolf of Wall Street finds himself in need of an unbugged telephone after taking a Quaalude. He drives his Lamborghini to the nearest pay phone, which is at the Brookville Country Club. Belfort recounted for New York Magazine his Tom Wolfe-style thoughts when he collapsed in the clubhouse:

“I”m lying on my back and see the ceiling has cracks in it,” Belfort says. “I”m like, Why are the WASPs not paying for their ceiling? What a troubling thought that they don”t fix the ceiling in this WASP heaven”maybe they”re running out of money?”

Bradley S. Klein, a GolfWeek writer who has done much to publicize Jewish country clubs, recounts an anecdote from 1990 told by an Inwood member:

The conversation turned to annual fees. I forget the exact numbers, but it was something like $5,000 for Olympic and about $5,500 for Medinah. Our host from Oakmont said that his dues were right in the middle.

Olympic, Medinah, and Oakmont are all world famous courses that regularly host the U.S. Open or PGA Championship.

Jewish clubs were universally acknowledged to have had much better dining rooms than gentile clubs. Robert H. Boyle reported in Sports Illustrated in 1962:

…members of Jewish clubs habitually eat more and drink less than do Christian club members. … Significantly, of all the clubs surveyed by SPORTS ILLUSTRATED, the one most esteemed for its food was the Hillcrest Country Club in Los Angeles, a predominantly Jewish club drawing heavily on show business. … “Hillcrest,” Milton Berle, a member, once remarked, “is a dining club with golf.”

Hillcrest’s golf course, while located on rolling hills close to the superlative North Course of the Los Angeles Country Club (which will host the 2023 U.S. Open), is surprisingly pedestrian. Golf architect Tom Doak rated Hillcrest only a 3 on his 0 to 10 scale in The Confidential Guide to Golf Courses. Nothing much has changed since Groucho Marx, Jack Benny, and George Burns had the big table in the Hillcrest dining room. Sports Illustrated wrote in 1995:

Today, in many ways golf is secondary at Hillcrest. … Is there anything different about the predominantly Jewish clubs? Food, it seems, is the only thing. Both Brentwood and Hillcrest are renowned for their chow because their members demand it. “Our members would rather spend money on upgrading the food than the golf course,” says Brentwood V.P. Bennett Wolf with a wry (rye?) smile.

Although it’s almost universally claimed that the only reason Jews formed their own clubs was because of discrimination by gentiles, that seems increasingly like a tendentious talking point. After all, they had separate ideas of what was fun: WASPs and Irish Catholics liked golf and drinking, while Jews liked dining and entertainment.