The Nagging Persistence of Tribalism 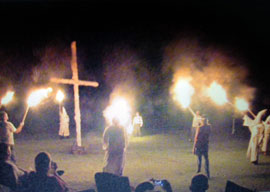 Last week in rural western Alabama, members of the Christian Identity movement teamed up with Klansmen to host a three-day shindig that ended on Friday with a cross burning. The event gained national attention after local residents complained about a flyer that specified “All White Christians Invited.”

Without a dandelion petal’s worth of irony among them, News One for Black America and the National Association for the Advancement of Colored People condemned the blasphemous idea of an event designed exclusively for whites. On the other side of Alabama, the preposterously well-funded Southern Poverty Law Center, helmed disproportionately by members of a group who deem themselves “God’s chosen people,” have condemned the Christian Identity movement as a hate group for daring to deem themselves “God’s chosen people.”

Other critics used this isolated event, which even provoked considerable local criticism, to issue blanket condemnations of whites, Christianity, Republicans, and, of course, “the South,” although the South has always been America’s blackest region.

Predictably, the event’s attendees were scorned by “humanists” as stupid, repellent, and genetically retrograde subhumans who crawled out from under a rock. These “racist” throwbacks are to be despised, shunned, spat upon, and deserve violent retaliation”which, through no coincidence whatsoever, is precisely the sort of stereotyping they self-righteously condemn in “racists.”

No matter the tribe, that’s how all tribes act”they seek to dehumanize and eradicate non-members. Why, it’s almost like they act that way without even thinking.

No cultural group on Earth seems capable of existing without demonizing and targeting a cultural “other.” Whether it’s manifested through blood (race and ethnicity) or water (religion and ideology), tribal behavior seems indelibly identical. Groups can”t seem to exist, much less thrive, without a designated scapegoad scapegoat.

Despite all the efforts to “get past” racism and “erace” it, all human social groups seem incapable of getting past the same sort of ingroup/outgroup, good guys/bad guys, devils/angels binary thinking for which they condemn those pesky, incestuous, snaggletoothed “racists””who, as luck would have it, always seem to belong to the same race, even though, well, um, race doesn”t exist.

If “racism” is merely a dishonestly dirty word to describe white tribalism, it may cut deeper and ultimately be more ineradicable than relative trifles such as ideological and religious schisms. If it’s a natural instinct that can”t be eliminated without ceaseless Maoist-style propaganda, shaming, and coercion, then political measures to counter it must inevitably become totalitarian. I call it “egalitotalitarianism.”

If you want to get conspiratorial”or at least acknowledge the fact that “divide and conquer” is the oldest trick in the political playbook”stuffing a nation full of people who are bound to have tribal differences is a good way to keep them at each other’s throats rather than focused on the power mechanisms that control them.

I”m a rare bird in that I”m not seduced by any tribal drumbeat, whether ethnic, religious, or ideological. Yet by default, I belong to one of the world’s most persistently persecuted minorities in that I believe human history and social conflict are best viewed through the cold microscope of facts and logic rather than the dim prism of moralistic mystical groupthink. So when I approach the radioactive and comically stigmatized concept of “racism,” my first question isn”t “How do we stop it?”; it’s “Why does it exist in the first place?”

Modern social scientists, who are little more than unscientific socialists, variously view racism as a cancer, a sin, an aberration, and a mental illness rather than a natural and ubiquitous phenomenon. Ignoring the fact that every culture throughout human history has been ethnocentric, they frame racism as an exclusive product of white supremacy, European colonialism, and predatory palefaced capitalism. They also shellac it with a thick gloppy glaze of moralistic condemnation, depicting it as the worst and most destructive of all possible human instincts. The psychological establishment is well on its way to depicting “sociobiological“ drives as personality disorders rather than natural drives toward self-preservation, which in a bygone era were seen as the epitome of mental health.