The Naked Tyrants of Dante’s Beach 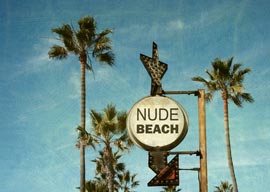 My wife has a little house in Lido di Dante, a beautiful beach just south of Ravenna where Dante himself died in 1321. The beach is three miles of unspoiled sand dunes and pine trees.

But we don”t go to the beach because it has become Italy’s most famous nudist beach. Even if we did not have five small children, we would prefer not to be surrounded by so much unsolicited naked flesh.

Nor do we use the house even in the village which is next to the beach and named after it, because the nudisti attract various species of sexual weirdo, especially guardoni (voyeurs) and scambisti (swingers). If not the same species as the nudisti, the guardoni and the scambisti are closely related subspecies. You would need a Ph.D. in anthropology to tell the difference.

At night the little road outside my wife’s house is chockablock with curb-crawling cars that circle the village at a snail’s pace from midnight until dawn in search of a connection. When I”d make the mistake of sitting in the small garden to look at the moon or the stars, a car would stop sooner or later and the stranger at the wheel would stare at me, waiting. Sadly, Dante’s Beach is a modern-day Sodom and Gomorrah.

Nearly the entire shore along the 70 miles of coastline in the Romagna region where I live pullulates with umbrellas and sun beds and the noise of pop music. Behind these infernal beaches begins the endless nightmare of ugly hotels, shops, and restaurants.

Dante’s Beach, on the other hand, is una spiaggia libera (a free beach). Anyone can use it at no charge. It is di tutti (everyone’s). And no one can use it to make money. So no one can even rent out umbrellas or sun beds on it, let alone build anything hideous in the pine forest behind. It is also in a nature reserve.

So how come Dante’s Beach is a nudist beach? Because the mere sight of nudists is enough to scare off nearly everyone else.

“How come Dante’s Beach is a nudist beach? Because the mere sight of nudists is enough to scare off nearly everyone else.”

As happens so often in this morally fucked-up modern world, the rights of a minority”in this case a group of people obsessed with wandering around a beach naked in the company of other naked people”defeated the majority’s right not to witness behavior that it regards as obscene if not criminally insane.

The nudists first started coming to Dante’s Beach in the late 1960s. Over the years, there were halfhearted attempts every now and again by the police and the politicians to get rid of them.

For years, the Partito comunista italiano (nowadays called the Partito democratico), which has run the show in the Romagna since World War II, positively encouraged nudism at Dante’s Beach in the name of freedom. The previous mayor of Ravenna, who is now a senator but to show solidarity used to strip off himself every now and again, officially authorized nudism on a 1,000-meter stretch of the beach.

But then in 2006 a new regional law came in which stated that nudism can only be authorized on a beach if it provides toilet facilities and a lifeguard complete with watchtower. This was problematic for the “ex” communists on the Council in Ravenna. As the beach is in a nature reserve, no one has the right to build any structure on it. So the new mayor of Ravenna, who took over in 2007, has been unable to authorize the nudists.

Naturally, the lack of Council authorization did not stop the nudists but it at least banished them from heaven and consigned them, if not to hell, to purgatory.

As a result, the Forestali which is responsible for policing Dante’s Beach finally felt able to swing into action. Its officers recently swooped down from the dunes on the nudists over a two-month period and charged about 80 of them with “atti contro la pubblica decenza“ (acts against public decency), a very minor criminal offense used to prosecute, for example, someone caught urinating in public. The Forestali did not charge the nudists with the more serious offense of “atti osceni in un luogo pubblico“ (acts of obscenity in a public place) because they say they want to guarantee successful prosecutions to deter all nudists.

It made no difference. In June, a female judge dismissed the first prosecution to come to court”that of a 55-year-old man caught naked at 11:40AM on March 25, 2012″on the bizarre grounds that although nudity is no longer authorized on the beach, the beach is “normally or traditionally frequented” by nudists and so to wander naked on it does not offend public decency.