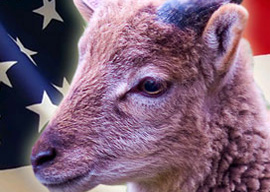 For men and women who’ve voluntarily joined an organization that demands (legally) blind obedience and counsels its minions to “Embrace the Suck,” American military personnel can be surprisingly pushy about getting official approval of their unorthodox lifestyle quirks.

The divisive campaign to repeal “don’t ask, don’t tell” is merely the most famous example. In the midst of two shooting wars, Wiccan soldiers fought for—and got—their five-pointed star added to the list of 38 (!) “emblems of belief” already allowed on Veterans Affairs grave markers. This raises the disturbing prospect that one day Arlington National Cemetery will resemble nothing so much as a giant charm bracelet.

So when it was widely reported last week that “the Senate legalized bestiality in the Armed Forces,” I wondered how I’d missed hearing about this latest “minority rights” cause before.

“Unlike the mainstreaming of pedophilia and furry fandom, I don’t foresee a similar trend developing with bestiality.”

As it turns out, the bestiality baby had simply been thrown out with the sodomy bath water when the Senate approved a defense bill that repealed Article 125 of the Uniform Code of Military Justice, to wit:

(a) Any person subject to this chapter who engages in unnatural carnal copulation with another person of the same or opposite sex or with an animal is guilty of sodomy. Penetration, however slight, is sufficient to complete the offense.

(b) Any person found guilty of sodomy shall be punished as a court-martial may direct.

“It’s all about using the military to advance this administration’s radical social agenda,” declared the unfortunately named Tony Perkins, President of the Family Research Council (FRC), whose Christian News Service broke the story.

America’s bloggers left and right were briefly united in their efforts to wring some humor out of this story—with underwhelming results, considering such promising material.

The conservative site DeathBy1000Papercuts noted, “This is the same bill that approved the military detention of U.S. citizens indefinitely. Left unreported: Can the military also detain U.S. animals without cause?”

“I’m not sure whether PETA approves or disapproves,” quipped fellow right-winger Wizbang, adding, “Mr. Ed could not be reached for comment.”