The Natural Map of the Middle East 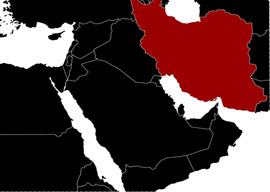 So wrote H.G. Wells in What Is Coming: A Forecast of Things to Come After the War in the year of Verdun and the Somme Offensive.

In redrawing the map of Europe, however, the statesmen of Versailles ignored Wells and parceled out Austrians, Hungarians, Germans and other nationalities to alien lands to divide, punish and weaken the defeated peoples.

So doing they set the table for a second world war.

The Middle East was sliced up along lines set down in the secret Sykes-Picot agreement. But with the Islamic awakening and Arab Spring toppling regimes, the natural map of the Middle East seems now to be asserting itself.

“Whoever was behind the attack on the Israeli tourists seems to want a war between the Jewish state of Israel and the Shia state of Iran.”

Sunni and Shia align with Sunni and Shia, as Protestants and Catholics did in 17th-century Europe. Ethiopia and Sudan split. Mali and Nigeria may be next. While world attention is focused on Aleppo and when Bashar Assad might fall, Syria itself may be about to disintegrate.

In Syria’s northeast, a Kurdish minority of 2 to 3 million with ethnic ties to Iraqi Kurdistan and 15 million Kurds in Turkey seems to be dissolving its ties to Damascus. A Kurdish nation carved out of Syria, Iraq, Turkey and Iran would appear to be a casus belli for all four nations. Yet in any natural map of the world, there would be a Kurdistan.

The Sunni four-fifths of the Syrian population seems fated to rise and the Muslim Brotherhood to rule, as happened in Egypt. The fall of Assad and his Shia Alawite minority would be celebrated by the Sunni across the border in Iraq’s Anbar province, who would then have a powerful new ally in any campaign to recapture Sunni lands lost to Iraqi Shia.

With its recent murderous attacks inside Iraq, al-Qaida seems to be instigating a new Sunni-Shia war to tear Iraq apart.

The fall of the Alawites in Damascus would end the dream of a Shia crescent—Iran, Iraq, Syria and Hezbollah—leave Hezbollah isolated, and conceivably lead to a renewal of Lebanon’s sectarian and civil war.

The losers in all this? Certainly Iran, which seems fated to lose its only Arab ally, Syria, and its land link to Hezbollah.

That would make Israel a winner. But Israel’s situation appears more perilous than it was a decade ago.