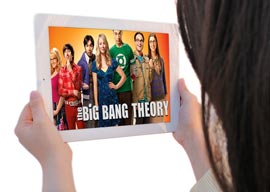 What things make us laugh?  In all times and places the top draws have been sex, class, and race.  The precise way these major themes tickle our funnybones varies with social trends, reflecting back to us the way we live now.

This entirely unoriginal observation was prompted by watching another episode of The Big Bang Theory“hereinafter TBBT” a half-hour TV sitcom I”ve become mildly addicted to.

If you haven”t seen it, TBBT centers around four young males and the young-female love interests of three of them.  The four men”Sheldon, Leonard, Howard, and Raj”are all high-level science geeks:  three theoretical physicists and an aerospace engineer.  The main joke of the show”the best TV sitcoms always have one big main joke”is that there is insufficient space in the human brain for both hyperintelligence and good social skills.  This isn”t altogether true, but it’s true enough to generate humor.  TBBT is not so much a sitcom as a nerd com.

The show’s sexual angle has an oddly conservative flavor to it.  Most of the sex humor in it is about women being”or in the case of Amy, Sheldon’s girl, wishing to be”sex objects for men.  The show gets away with this because the men in it are all such betas.  It’s hard to say who’s more underdoggy (no pun intended):  the women being lusted after, or the men lusting after them so incompetently.  The beta-tude of the men levels the playing field.

“Sure, it is possible to make humor out of despair: but that’s the bitterest, darkest kind of humor, not suitable for prime-time TV.”

Homosexuality isn”t present at all, so far as I have noticed.  Jim Parsons camps it up as the Sheldon character (and is in fact homosexual), but the story lines present Sheldon only as a fussy, OCD-afflicted straight guy with issues about physical intimacy.  His girlfriend Amy does seem to have occasional same-sex leanings, expressed by admiring remarks to beautiful Penny, Leonard’s main love interest:  “Do you even have pores?”  But this too is in line with the traditional conservative attitude that male homosexuality is disgusting, while the female style is merely comical.

There is no real class humor among the major characters.  Penny is a community-college dropout working as a waitress; but the gulf between her and the four men is intellectual, nothing to do with class.  She and they speak with the same diction and have the same attitudes to behavioral issues.  You can”t imagine any of them becoming meth addicts or attending a regatta.  They are all of the great American middle class.

Class shows up mainly in the person of Sheldon’s mother, an evangelical from Texas played by Roseanne veteran Laurie Metcalf.  In one episode Sheldon, arriving at the family home unexpectedly, sees through a window his mother”she’s a widow”being rogered by a strange man on the family couch.  When he later confronts her about what he saw, she makes a prole-Christian confession of weakness: “I”m not perfect, Sheldon … but that man’s booty is.”

The word “class” doesn”t really capture all of that second universal-humor element, though.  The rest is in-group status, a kind of micro-class.  The three guys who are theoretical physicists occasionally direct amused contempt at Howard, the aerospace engineer.  That might seem odd in a culture where “rocket scientist” is used to typify the smartest of smarts, but it’s exactly right in the show’s academic context.

I remember very well the mental map of scholarly specialties we math undergraduates carried around with us.  Math geeks were of course at the top, with physicists a tick or two below us.  Astronomers and chemists were somewhat lower, biologists considerably lower; but these were all respectably abstract, quantitative fields.

Engineers were a semi-civilized tribe on an adjacent island, beery oafs who played hard rugby and never listened to concert music.  Only medical students were lower: gap-toothed loons rumored to show disgraceful lack of respect to the cadavers they were given for dissection.