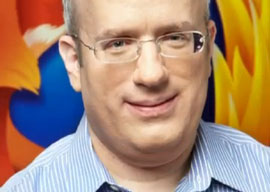 “There is a gay mafia,” said Bill Maher, “if you cross them you do get whacked.”

Maher, the host of HBO’s “Real Time,” was talking about the gay activists and their comrades who drove Brendan Eich out as CEO of Mozilla. Eich, who invented JavaScript and co-founded Mozilla in 1998, had been named chief executive in late March.

Instantly, he came under attack for having contributed $1,000 to Proposition 8, whereby a majority of Californians voted in 2008 to reinstate a ban on same-sex marriage. Prop 8 was backed by the Catholic Church, the Mormon Church and the black churches, and carried 70 percent of the African-American vote.

Though Eich apologized for any “pain” he had caused and pledged to promote equality for gays and lesbians at Mozilla, his plea for clemency failed to move his accusers. Too late. According to The Guardian, he quit after it was revealed that he had also contributed—“The horror, the horror!”—to the Buchanan campaign of 1992.

That cooked it. What further need was there of proof of the irredeemably malevolent character of Brendan Eich?

Observing the mob run this accomplished man out of a company he helped create, Andrew Sullivan blogged that Eich “has just been scalped” by gay activists. Sullivan went on:

“Will he now be forced to walk through the streets in shame? Why not the stocks? The whole thing disgusts me, as it should disgust anyone interested in a tolerant and diverse society.”

Yet, the purge of Eich, who, from his contributions—he also gave to Ron Paul—appears to be a traditionalist and libertarian—is being defended as a triumph of the First Amendment.

James Ball of The Guardian writes that far from being “a defeat for freedom of expression,” Eich’s removal is a “victory—the ouster of a founder and CEO by his own people, at a foundation based on open and equal expression.”

Eich’s forced resignation, writes Ball, “should be the textbook example of the system working exactly as it should.”

Ball seems to be saying that what the gay mob did to Eich at Mozilla is what the heroes of Maidan Square did in driving President Viktor Yanukovych out of power and out of his country.

This is how the democracy works now.

Mitchell Baker, the executive chairwoman of Mozilla Foundation, who escorted Eich out, said in her statement: “Mozilla believes both in equality and freedom of speech. Equality is necessary for meaningful speech. And you need free speech to fight for equality. Figuring out how to stand for both at the same time can be hard.”

George Orwell, thou shouldst be living at this hour.

What Baker is saying is that you have freedom of speech, so long as you use your speech to advocate equality.

And what do we do with those who use their freedom of speech to express their view, rooted in religion and history, that traditional marriage is not only superior to same-sex marriage, the latter is a contradiction of the natural and moral law.

And what of those institutions that teach and preach that outside traditional marriage sexual relations are wrong?