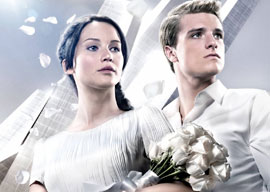 When a movie enjoys a $153-million opening weekend, you might think the writer-director would be the toast of the town. Yet even while Gary Ross’s 2012 hit The Hunger Games, a dystopian tale of provincial revolt against the corrupt Capitol, was still doing boffo box office, Lionsgate replaced him with hired gun Francis Lawrence (I Am Legend).

A former Clinton Administration speechwriter, Ross was best known for Seabiscuit, a 1930s horse racing allegory about how FDR gave Hope to the Little People. It garnered seven Oscar nominations and then was quickly forgotten.

In the first Hunger Games, Ross staged coal-mining District 12 to look like Dorothea Lange photos of migrant Okies. As a contrast, everybody in the parasitical Capitol appeared to be wearing leftover Jean Paul Gaultier designs for Chris Tucker’s Prince-style character in The Fifth Element. (Granted, that sounds more entertaining than the first Hunger Games actually was.)

“Perhaps The Hunger Games works best as an allegorical critique of poor dumb Red State Americans volunteering to serve in the Capitol’s wars without even getting a cut of the Beltway’s black-budget contracts.”

With luck, Ross’s epileptic camerawork on the opener marks the beginning of the end of faux documentary Shakycam, the most tired stylistic tic of the century.

Francis Lawrence makes The Hunger Games sequel Catching Fire significantly more watchable simply by rediscovering the Steadicam. Still, the competent new director can’t dig himself out of the morose, blue-grey hole that Ross had dug for him, at least not until the sequel’s last 20 minutes when the new movie does indeed catch fire, raising hopes that the second half of the tetralogy won’t be quite as glum of a viewing experience.

Perhaps we might eventually see a smile from Jennifer Lawrence (no relation to Francis), the Oscar-winning (Silver Linings Playbook) actress who plays the PTSD-addled heroine Katniss Everdeen.

Much of Lawrence’s star appeal to teenagers comes from being a normal-looking pretty American girl, a Homecoming-Queen-second-runner-up type. Her apple-cheeked face is distinctive mostly for her wide, well-padded cheekbones.

Since she’s only 23, everybody predicts a great career for her. But she strikes me as a girl built more for comfort than for speed, one whom Hollywood will hound to keep her weight down, with unpredictable consequences. Already, they seem to be doing something strange with her face. Lighting? Makeup? Digital manipulation in postproduction? Collagen injections? Beats me, but ever since X-Men: First Class she hasn’t looked the same as she did in her early low-budget films Winter’s Bone and The Beaver.

Like the Twilight series, Suzanne Collins’s The Hunger Games young-adult novels are aimed at 12-year-old female readers. This puts the movies squarely in the intellectual wheelhouse of average Americans, a sizable fraction of whom don’t read much at all.

Unlike the phenomenally girly Twilight, however, The Hunger Games concerns itself with traditionally male topics such as sports, violence, politics, and war. The downside of this is that Ms. Collins hasn’t thought much about her main topics (subjects that appealed more to her military historian father), and thus the movies tend to be direly unclever. The lack of effective satire in The Hunger Games series simply wears me down (although many in the audience seemed to find parts of the new movie’s second half amusing).

The upside is that the purity and intensity of Collins’s disapproval of the harm men do to each other is never seduced by any sporting interest in tactics. The Hunger Games is relentless in its condemnation of children slaughtering each other on live TV.