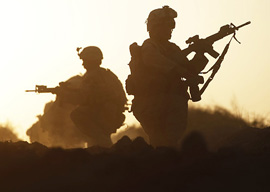 Should we seek the deeper meaning in the video of US Marines urinating on Taliban combatants’ dead bodies in the wilds of Afghanistan? What does it tell us about our country? What does it say about Washington and the hypocrites in charge of the lone surviving superpower? What does it demonstrate about Washington’s self-destructive crusade that started with 9/11 and led to the “War on Terror”?

The incident itself is trivial, albeit symbolic. Such conduct is illegal under the Geneva Conventions and contrary to US military regulations. It is also a war crime. Nonetheless, it might be comparable to drunken acts at a rogue fraternity house. But these Marines were not drunk; they were only acting like idiots.

The Marines were doing little more than aping the attitudes and lawlessness of their superiors—the Washington politicians and functionaries who have launched a fool’s errand across the greater Middle East and Southwest Asia.

In their own small and depraved way, the Marines in the video were carrying out Washington’s grandiose foreign-policy objectives. As such, they reflect the neoconservative mindset of the Washington foreign-policy establishment, whose hubris has trickled down to the troops.

“In their own small and depraved way, the Marines in the video were carrying out Washington’s grandiose foreign-policy objectives.”

The smart operators at the top of the pyramid thrive on secrecy, misdirection, and lies. It got them where they are. They are sticking with it. The foot soldiers out in the field doing the dirty work are more honest but less mature. The Marines made the mistake of flaunting their misdeed to the world via YouTube.

And now Washington officially goes through the act of being outraged. How can the Marines be criticized by “our elites” for symbolically carrying out US foreign-policy objectives? Were not the deceased Taliban they urinated upon “terrorists”? That’s what Hillary Rodham “hell to pay” Clinton, the second-biggest hypocrite in Washington next to Mr. Peace Prize, has told us.

H. R. Clinton has not faced such a challenging public-relations task since the night Israeli commandos stormed the Gaza flotilla on May 31, 2010. The official US position is all in favor of Israel blockading Gaza, but Washington wanted to distance itself from the killings. Mr. Peace Prize ran for the tall grass, leaving H. R. Clinton to remark from the State Department on June 1st, 2010: “I think the situation from our perspective is very difficult and requires careful, thoughtful responses from all concerned.” Blah, blah, blah.

Ms. Clinton’s approach was less measured in the urinating Marines’ case. The PR problem confronting the US Secretary of State was essentially the same as with the Gaza flotilla twenty months previous: how to keep the region’s natives from reacting negatively to the ongoing war efforts Washington and its partners undertake against “terrorists,” dissidents, and other reprobates.