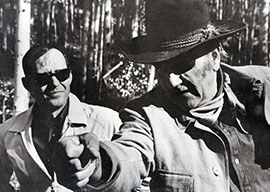 The Coen Brothers” devotion to odd vernaculars has contributed to their haphazard box-office track record. Audiences immediately cottoned to Fargo‘s “You betcha” Minnesota accents and almost as quickly to George Clooney’s grandiloquent Southern pettifoggery in O Brother, Where Art Thou? Yet fans required a couple of years to warm up to Jeff Bridges’s acid-casualty argot in The Big Lebowski. And to this day, nobody (except me) can stand Jennifer Jason Leigh’s screwball-comedy newshound lingo in The Hudsucker Proxy.

True Grit will likely wind up as the frauteurs” biggest box-office hit yet, perhaps even their first to earn $100 million domestically. True Grit‘s verbose Victorian Wild West dialogue is at times daunting to decipher, yet it’s somewhat familiar from the Oscar-winning John Wayne comic Western and the surprisingly influential 1968 Charles Portis novel. Over 40 years ago, Portis created prototypical Coen Brothers characters”hyper-articulate, eccentric, and violent”avant la lettre, allowing the Coens now to make a straightforward adaptation of his novel.

The semi-reclusive Portis celebrates his 77th birthday today. Though he’s obscure to the public, other writers appreciate his droll style.

“To journalists of a certain age, Charles Portis remains a legend for having the grit to live out their Great American Novelist dream.”

Tom Wolfe, who sat next to Portis in the old New York Herald Tribune city room, recounted in his memoir on New Journalism’s roots that he and every other post-WWII American reporter considered nonfiction a day job, “just one more of your devious ways of postponing the decision to put it all on the line…and go into the shack…and write your novel. Your Novel!” To journalists of a certain age, Charles Portis remains a legend for having the grit to live out their Great American Novelist dream. Wolfe marveled: “Portis quit cold one day…and moved into a fishing shack in Arkansas….Then he wrote True Grit, which was a best-seller. The reviews were terrific….A fishing shack! In Arkansas! It was too goddamned perfect to be true, and yet there it was.”

Portis’s 14-year-old heroine Mattie Ross (played by newcomer Hailee Steinfeld) is an unsmiling Calvinist spinster-to-be who plots Old Testament retribution upon the outlaw who slew her father. Her diction never resorts to contractions. Ethan Coen explains: “We made a movie about Jews [2009’s mordant A Serious Man], so we decided to make a movie about a Protestant….Mattie is even more of a schoolmarm in the book”such an old Protestant at the age of 14, which is why the book is so funny.”

On the other hand, the drunken gunman she hires to lead her into Indian Territory, US Deputy Marshall Rooster Cogburn (Bridges), mumbles authentic frontier gibberish.