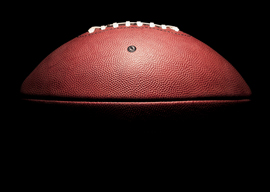 The latest brouhaha about professional football players beating up their little wimmen has me shocked, shocked that such a thing could take place in modern day America, home of the depraved. But before I go on about why black football multimillionaires don”t get enough violence on the playing field but have to bring it home with them, a word about head trauma.

When I was a fresh kid from Europe in lower school at Lawrenceville in 1949, I was given some pads and a helmet and told to tackle the one carrying the ball. Tackle low, tackle clean, was the order of the day. The only concussion I ever got after six years of prep school was when I fell backwards from a dorm stoop while dead drunk on the last day of my last year. Mind you, everyone back then tackled low and clean; the head-butt tackle was made popular much later by black dudes coming into the pros from great places of higher learning like Florida State and Miami U.

“The league’s recent admission that around 30 percent of players will suffer from accelerated cognitive impairment is as damning as it is hypocritical. All it has to do is change the rules.”

I recently watched a documentary on the New York Giants circa 1956. The names are now forgotten, but Sam Huff, Andy Robustelli, Arnie Weinmeister, and Frank Gifford are Hall of Famers. As are Roosevelt Brown and Rosey Grier”well, Grier made the New Jersey Hall of Fame for Sports, anyway”two black players who, in the film, were as articulate as they were fierce but clean on the field. I suspect both Roosevelts came from a two-parent family, as it was customary back then. Which brings me to the point of this column: The NFL today is mostly made up of African-American young men whose fathers went missing somewhere along the way.

It is a microcosm of the black American family today, and the NFL kerfuffle is no different. It is a sad indictment of American life that young black males are still almost as likely to end up in prison as at university. The violent acts committed by NFL players against women and children are no different from the violence across America in black households, with the exception that football players are millionaires. But American black leaders don”t want to know. A black kid with a book is acting white, according to the race hustlers, and criticizing black violence is blaming the victim. As Charles Barkley said while defending Adrian Peterson, who beat his four-year-old with a rather thick tree branch, “every black parent in the South is going to be in jail.”

A wise black man once said, “If our people studied calculus like we studied basketball, we”d be running MIT.” Yes, that’s true, but it takes a father to make the kid become interested in calculus, not a mother on drugs who had the kid at 15 and has had six more children while he was growing up on the street. The NFL is worth almost ten billion dollars in annual revenues, and what it sells is violence, however controlled. It is no different from the rest of the entertainment industry that sells us blood and gore nonstop, except that it’s for real, without the ketchup. College football does not exactly lag behind the pros where domestic violence is concerned. Jameis (sic) Winston won the Heisman trophy as a freshman last year at FSU”a bit like Oxford with palm trees instead of dreaming spires”while the voting committee knew that he had allegedly raped a fellow student and was fighting the case in court.