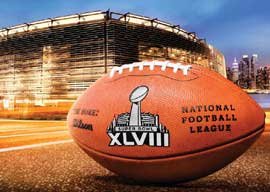 I just watched the Super Bowl, and boy, am I bored. What’s worse, I am left with an empty, restless, lonely sense of ennui and purposelessness in the pit of my soul, which hovers mere inches above the pit of my stomach. Watching the Weather Channel would have packed more thrills and suspense. If this grotesquely overhyped midwinter sporting spectacle truly represents our national communal High Holy Day, I”d say it’s high time we start working on a more exciting culture, people.

As I”ve stated several times with an overbearing sense of gravitas and a nauseating flourish of false piety, I do not personally own a television. But after reading about the Gay Grammies and the “multicultural crap” that allegedly pockmarked the opening ceremonies for the 2012 London Olympics, I figured I’d watch the 2014 Super Bowl and scrutinize what would undoubtedly be relentless Cultural Marxist agitprop shoved down the gullible nation’s throats like so many rotting dollops of guacamole on stale nacho chips. Alas, I was denied even that perverse pleasure. From start to finish, the entire limp event was so unremarkable that I couldn’t even find much that pissed me off”which really pissed me off.

“Living in an authoritarian prison is the price we pay for freedom.”

This year’s game was being touted as the “Pot Bowl,” seeing as both teams represented the largest cities in the only two states to have entirely legalized cannabis. Both Washington and Colorado have tremendous natural beauty and tremendously annoying people. Although I’ve smoked bales of weed over my lifetime, I don’t personally care much for the city of Seattle. Denver I like even less. Still, I was pulling for the Broncos mainly because they have a player with the fantastic name of Zane Beadles.

I can’t even remember the last time I watched a Super Bowl”probably the last time the Eagles played, whenever that was. This time around, the cruel and sadistic football gods denied me and the rest of the 110 million or so viewers even the slightest shred of excitement, mystery, or intrigue. We had been promised a close and thrilling game, with Denver favored by a slim 2.5-point margin; instead they lost by 35. The only blips of drama came through watching sideline shots of Peyton Manning, a genius of a quarterback, as his face slowly melted realizing that this game will forever mark him as a heel and a choker and a goat and a chump. I genuinely felt bad for him even though, quite frankly, his forehead is too big and he comes off as sort of a dick.

The game was played in the magnificently ugly and instantly carcinogenic New Jersey town of East Rutherford, about ten miles as the terrorist crow flies from where the World Trade Center was blown to dust on 9/11/2001. Security precautions involved such insane measures as Black Hawk helicopters and “hidden snipers.” There was even a series of “suspicious powder” scares near the stadium days before the game. But although it would have made the festivities far more exciting, there were no terrorist attacks. There were merely snipers and choppers and pat-downs and vehicle scans and bomb-sniffing dogs and 4,000 security agents and an elaborate constellation of intelligence-sharing and surveillance. Living in an authoritarian prison is the price we pay for freedom.