The Night They Punched His Lights Out in Georgia 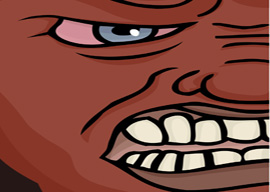 Shortly before the stroke of midnight on August 24 in Savannah, GA, a young interracial couple was strolling downtown through a former slave market called Ellis Square. Twenty-three-year-old Andrew Quade, the white boyfriend of a black female named Olufisayo Bakre, would leave in an ambulance after being pummeled unconscious by what Bakre describes as three black males.

“He was basically left for dead,” Bakre told a television reporter. “I don’t want to go into, like, all the gory details, but, um, they could have stopped, and they kept going….One of them was making racial comments toward us and the other was blowing kisses, so it was very, it was a very aggravating situation to be in.”

“I didn’t wanna just be like, like, freak out on them, because I thought they were sayin’ something to me,” Quade told a reporter. “I was just trying to gain, you know, a little more knowledge about the situation, and before we could even do that, there was just, BAM-BAM,” said Quade, who may be the same person designated by the same TV station as a “Top Teen” in 2006. Quade reportedly refused to be filmed on camera because his face looked even worse than in gruesome photos that were snapped at the hospital. A full week after the attack, Quade’s condition continued to worsen, and he was flown to Atlanta to undergo eye surgery.

“How long will the obvious double standard persist? Exactly as long as everyone keeps their mouths shut for fear of being called bad names.”

“I just hope they get caught, really,” Bakre said. “I just hope justice prevails at the end of the day. And this shouldn’t happen in this day and age. I know we’re in the South and all that yadda-ya, but, I don’t know, it’s time for a change, I think.”

Interesting she should mention the South, a place that is never stereotyped for black-on-white “hate crimes.” The South is known as a place where drooling hillbillies rape you and you shouldn’t “trust your soul to no backwoods Southern lawyer.” It’s also where Emmett Till was murdered for allegedly “wolf-whistling” at a white woman.

Then again, Emmett Till was murdered 57 years ago, while Andrew Quade was beaten unconscious a little over a week ago. But searching their names late Sunday afternoon on Google News”which supposedly documents what’s happening now”yielded more than 75 hits for “Emmett Till“ for every instance of “Andrew Quade.”

Why is that? And why is it considered racist to so much as wonder why? Has all this jibber-jabber about “equality” merely been a power-grabbing wolf in sheep’s clothing?

I called the Savannah Police Department’s non-emergency line to verify the date that Andrew Quade was assaulted, and a woman who sounded black”kill me for stereotyping”said, “Oh, you mean the hate crime?” But Georgia is one of only five states with no hate-crime law, so it’s up to US Attorney General Eric Holder to prosecute the incident under federal hate-crime statutes. Unless you want to die of auto-idiotic asphyxiation, I wouldn’t hold my breath.

Living in Georgia, I’ve heard repeated murmurs that there is no place in the state thicker with racial tension than Savannah. It’s presumed that blacks still harbor resentment for the slave era as well as their infamous betrayal near Savannah at the hands of a Union general whose name, in the bitterest of ironies, was Jefferson Davis.