The Nook: Little China in Liverpool 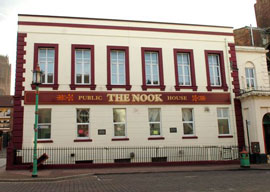 I”ll be speaking to the American Renaissance conference at the end of this month. (What, you haven”t signed up yet? Still time!) Title of talk: “China, America, and the Chinese in America.” I should be able to work some topical references into the last part, what with California state senator Leland Yee having apparently brought some traditional Chinese politics over to the Golden Mountain with him, and the sleeping giant of college-crazy Chinese American parents that’s been