The Normalisation of Crime 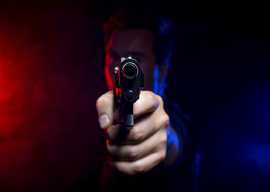 A few years ago, someone opened fire on me in St. John’s Wood. If you’re surprised, spare a thought for me. I was stepping onto the crosswalk leading toward Regent’s Park when a moped approached at speed. There was a moment of indecision: Would it proceed or would I? I stepped back, ceding my right of way with a truculent shrug. As the moped swept by, the pillion passenger turned angrily and waved an arm. There was a loud crack. As the bike distanced itself, a sharp smell drifted past. It was cordite.

I looked around. Sun shone on the neat lawns of the granny flats. Nothing had changed. It was still a nice day and I still had a dog to walk. Walking past the zoo and the school cricket matches, the moment reverberated. Had what I thought happened really happened? I tried to imagine my leaking body attended by a distraught border collie; inexplicably discovered together in one of the most genteel spots in London.

What would the police have thought? Could that really be the same world I still inhabited? The noise had been flat and half covered by the revving bike; nothing like the hearty boom of a 9mm. But the smell was a memory I couldn’t exorcise. As the weeks passed I eliminated the impossible and concluded that what remained, however improbable, was the truth: that in a moment of irritation or exuberance, a stranger had nearly murdered me. Of course, I didn’t report it to the police. It took too long to process, for one. I also had no evidence. And what could they have done?

“The more technocratic society has become, the more it has slid into disorder.”

It transpires those kids were in the avant-garde of moped crime. Fifty a day now occur in London. Together with stabbings, this makes it a more dangerous capital than New York. The pattern is always the same: One or more moped riders draw up, relieve one or more people of their possessions—or even vehicles—then speed off. Like my experience, it is brutally binary. One moment life is normal, then you are confronted with violence, then it disappears up the road. Last week, the Apple Store on Regent Street was subjected to such a three-minute visitation. There is little the police can do—or, increasingly, even try to do. And yet the U.K. has more CCTV cameras than any other European country.

All of which points to an odd paradox of Western life: The more technocratic society has become, the more it has slid into disorder. Government spending as a proportion of GDP is off the charts compared with historical norms. Governments will pay to reassign your gender. They will pay to relieve poverty on the other side of the world. They will take up arms on a whole range of real and alleged discrimination issues. They will remove your children from you if you espouse incorrect views. But the one responsibility they eschew is keeping you safe as you walk home. Signs have appeared in London telling residents not to use their phones in public. Police have similarly concluded that they cannot prevent knife murders, instead issuing “threat to life” notices to at-risk teenagers. Suffice it to say that the social contract isn’t what it used to be. Why is this?

The immediate, superficial debate is about policing tactics. In place of the highly successful zero-tolerance—“broken windows”—approach that cleaned up New York, British cops have adopted “proactive policing.” This means sending concentrated patrols to high-crime areas while removing their deterrent presence from low-crime areas. A recent study has shown this increases crime by giving it freer rein in rich areas while residents of poor areas feel unduly scrutinized. A second debate is about judicial measures to limit the rise in prison populations. But these are all surface questions. The heart of the issue is, what constitutes society? Is it a self-regulating organism? Or is it a simmering anarchy enclosed by rules? If it is self-regulating, what is the glue that binds it? And if it is anarchy, what are the wedges that drive it further apart?

Certainly the posture of the British police has shifted from one assumption to the other. Its founder, Sir Robert Peel, had a vision of “citizens in uniform” to provide a visible unarmed presence to deter criminals. This preventative mission has drifted toward catching perpetrators after a crime, when it is too late for the victim. CCTV itself is a case in point. Funded as a deterrent, it is instead used to gather evidence; although antifa-style face coverings easily circumvent this. Victims of street crime report that the police take testimonies largely as a box-ticking exercise. They now ask the public to report crime online to alleviate the paperwork. The baseline assumption has moved from a fundamentally stable community requiring deterrence to that of an unstable society where crime is the norm. Soon the question will be asked: But why were you using your mobile phone in public?

Although the normalization of crime has been a slow process, there have been inflection points. One such was the London riots of 2011, when large swaths of the city erupted into violent anarchy in response to the death of a suspect. Diners were stripped of their valuables in Notting Hill. Buildings in the suburbs were set alight with people sleeping inside. Even The Economist was shocked out its liberal complacency. “In the absence of internal, moral restraints, external ones can only do so much,” read its lead article. Peel’s vision of “citizens in uniform” once rested precisely on such moral constraints. What had become of them? The left often claims disorder is becoming mainstream due to income disparity and austerity. But such relativism strips the economically disadvantaged of their moral agency, ignoring the fact that there are plenty of law-abiding poor people (not to mention law-breaking rich people).