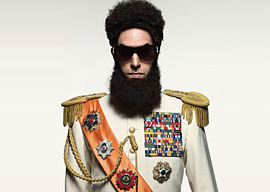 So Jewish people don”t run Hollywood after all?

That was my first snarky thought when I heard about the flap between comedian Sacha Baron Cohen (Borat, Talladega Nights) and the Academy of Motion Picture Arts and Sciences, AKA those old white (and probably Jewish but DON”T dare ask!) men who dole out the Oscars.

Baron Cohen had vowed to walk the red carpet Sunday night costumed as the titular character in his next movie The Dictator, which is about a bombastic strongman styled on Hussein and Gaddafi.

The Academy countered by pulling Baron Cohen’s ticket to the Oscars, citing corporate bylaws forbidding participants from promoting their projects during the world’s longest and most widely watched movie commercial.

If the “Holly-blood” libel were true, I mused, surely they wouldn”t forbid one of their own (himself an Academy member) from participating in its most prestigious annual ritual.

After all, Baron Cohen”a kosher-keeping onetime kibbutznik descended from a Holocaust survivor”belongs to a fairly distinguished family of English Jews.

Baron Cohen has built his career on pranks and masquerade. He’s made a public nuisance of himself at every entertainment spectacle to which he’s been invited. What did the Academy expect?

Baron Cohen started out as “Ali G,” a coarse “chav” of indeterminate ethnicity who corralled the likes of Boutros Boutros-Ghali and Buzz Aldrin into squirm-inducing interviews.

He rocketed to superstardom, however, as Borat Sagdiyev, an obnoxious Jew-hating Kazakh journalist documenting hickery across the USA. Well-timed to take advantage of worldwide Bush Derangement Syndrome, the movie Borat (2006) made millions but left viewers divided.

I thought Baron Cohen took advantage of American decency and hospitality to create an anti-American film. He showcased the United States“rather than, say, Switzerland or, well, England“as a hotbed of Christian anti-Semitism.

Naturally, Yankee-bashing was what critics and viewers loved about Borat, hailing him as “brave” and “transgressive” and all the other adjectives bandied about when praising the latest wimpy, derivative “artiste.” (Who else is Borat but a mutation of Andy Kaufman’s “Foreign Man” and “Tony Clifton” characters?)

Perhaps Baron Cohen heard the criticisms of even self-described fans such as Ron Rosenbaum, who complained about Borat in Slate:

Is this the true face of the anti-Semitism to be feared in the world, a world in which a near-nuclear nation promises to wipe 5 million Jews off the map? Or does this belittle anti-Semitism as the province of powerless, backward dimwits?