The Obama Bible, AKA The New Book of Jobs 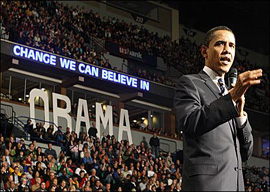 Apparently the $447B check cleared and Obama was allowed to deliver Part Two of the “American Jobs Speech” he gave last Thursday. To set the proper ambiance, Obama strategically placed lots of “working Americans” behind the podium as a backdrop for the momentous occasion, including veterans, teachers, construction workers, police officers, and firefighters. What—no community organizers?

Obama appeared to have escaped the bondage of his liberal ideas and his do-nothing reputation. Chased out of Liberalia by that evil Tea Party Pharaoh, Obama possessed the countenance of Moses, seemingly descending Mount Sinai as he strode forward to the podium.

Obama promised to deliver his ideas with no subterfuge. Unlike his actions in the past such as sealing his college transcripts, there would be transparency with jobs. Obama would not treat jobs like his birth certificate or his Harvard writings and other musings. Lobbyists are not welcome here, as jobs are the order of the day, and almost three years into his presidency we need to know that jobs are Priority #1.

“In the event that no jobs are created, fear not. For Obama giveth unemployment benefits.”

Forget the past where Obama preferred to have Congress provide ideas that he would simply mock. This time Obama would make this happen; Obama would deliver. Moses met with God, but for Obama, that was wholly unnecessary. Obama was now The Deliverer.

All was good in America, as we now have our new bible: The Obama Bible, AKA The New Book of Jobs.

Thus it is written, let it be done.

Yea, verily Obama approved the “bipartisan” ideas, so let the job creation begin. The nation is in need of a jobs healing. Hallelujah!