The Obamas: Not Quite the Huxtables 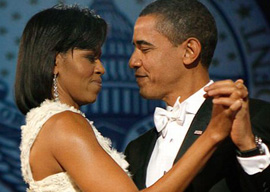 In her new book The Obamas, Jodi Kantor, a New York Times White House correspondent, recounts that Jacqueline Kennedy once fled the White House without her tomcatting husband for a month’s vacation in Florida, dumping her tiny son on her relatives. During that spell, JFK only bothered to visit John-John once.

How times have changed.

In our child-centric age, President Obama insists on eating dinner with his daughters and wife at least five times per week.

Kantor’s ostensible goal in The Obamas, which is based on over 200 interviews with Obama insiders, is to portray a normal yuppie couple trying to achieve conventional modern domesticity in the White House’s extraordinary environment.

Much of the current First Family’s appeal is similar to that of The Cosby Show a generation ago—seeing a black family be good role models for other blacks by conforming so visibly to contemporary upper-middle-class norms of monogamy, companionate marriage, and parental investment in coaching girls’ sports. Yet as Kantor’s sympathetic but insidiously subversive narrative of Barack and Michelle’s White House years documents, it’s hard to remain a larger-than-life character like JFK was when you have to spend so much time Working on Your Relationship. In The Obamas, Barack ends up looking smaller than life.

“In The Obamas, Barack ends up looking smaller than life.”

He’s been visibly deflating ever since that night in Grant Park in November 2008. The rise and decline of Barack Obama, from part-time state legislator to Obamamania to National Buzzkill, is one of the weirder stories in recent American history. But it’s not one that many Americans are yet interested in exploring realistically, so it’s not Kantor’s intended theme. Still, The Obamas is stuffed with facts relevant to understanding this strange tale.

Much of The Obamas’ focus is psychological, and rightly so. History is often made by those whose positive moods are timed right. For example, at the last possible moment to head off a Mitt Romney cakewalk to the GOP nomination, Newt Gingrich—whose mother was bipolar—turned into a ball of fire. Newt’s currently promising a moon colony by his second term and is proudly accepting the label “grandiose.”

Kantor is struck by the less flagrant but still marked swings in Obama’s mood and energy level. These mostly correlate with his approval ratings, but they sometimes go off on random jags of their own. For instance, Obama’s reaction to his party losing the House in 2010 was blithe. He assumed he might be better off without all that Democratic dead weight holding him back, only to be predictably disillusioned in the disastrous debt-ceiling showdown.

Oddly, Obama’s down spells never seem to undermine his ego, which in Kantor’s telling remains bizarrely expansive for such an otherwise rational individual. Perhaps as a metaphor for a lifetime of affirmative action’s warping effects, Kantor is fascinated by this middle-aged politician’s obsession with competing on his White House basketball court against invited NBA superstars. Whether Obama can keep clear in his head that they’re just letting him score remains unclear to the author.