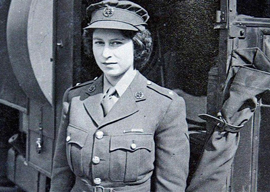 I have taken another trip on my syllogismobile to an alternate universe. Among the artifacts I brought back with me was A.J. Braithwaite’s History of Britain (2011 edition), a standard text for British schoolchildren in that universe.

The following extracts are from the final chapter, titled “Britain since 1945.”

Britain and Ireland became Soviet satellites in 1951. The triggering events were domestic:  the “hung election” of February the previous year, and the disorders that followed.

The trade unions responded to Churchill’s wage cuts with a general strike. Troops summoned to suppress the strikers mutinied; then the cabinet room bombing of September 1950 (blamed on Irish terrorists at the time, but now known to have been a GRU operation) left the nation leaderless.

There were hopes that America might intervene; but the invasion of Korea and the collapse of the “United Nations” project diverted the energies of the Wallace administration. U.S. Secretary of State Joseph Kennedy famously declared that: “The homeland of arrogant imperialism is not worth the bones of one more G.I.” Vice President Paul Robeson piled on, declaring Britain to be “the historic oppressor of colored people everywhere.”

“Long experience of being garrisoned by foreign troops speaking a foreign language had revived the prickly isolationism that visitors had noted among the British far back in medieval times.”

Facing the disintegration of military discipline, suffering widespread shortages of food and coal, and with no prospect of U.S. help, Britons at first greeted the seizure of power by Konni Zilliacus and his followers with general relief. The subsequent authoritarian measures, however, created scattered unrest. When Zilliacus announced the abolition of the monarchy, a group of naval officers attempted a coup.

Ever the opportunist, Stalin announced the U.S.S.R.’s “solidarity with the working people of Britain and Ireland.” Soviet paratroopers occupied key points in central London; they were resisted by patriotic units of the British military. When the Soviet expeditionary force seemed likely to be overwhelmed, Stalin delivered his nuclear ultimatum.

The U.S.S.R. had already tested a nuclear weapon. It was not known how many such weapons they had manufactured. Britain’s own nuclear-weapons program was still in the planning stage. Fearing the destruction of major population centers, with no support from abroad, and weary after 12 years of war, austerity, and civil strife, Britain capitulated. The King and Queen refused to leave Buckingham Palace, but Royal Air Force loyalists flew the royal princesses to Canada.

The subsequent occupation was at first characterized by heavy-handed measures on the part of the Soviet authorities and their British and Irish puppets.

Proclamation of the United Soviet Republic of Ireland was bitterly resisted in the six counties of Northern Ireland, leading to thousands of deaths and tens of thousands of deportations to the Soviet Far East. The Northern uprising was not a surprise; but the support for it voiced by Southern Ireland’s aging president, Ãamon de Valera, astonished everyone, the Soviet occupation authorities most of all. De Valera disappeared into the Gulag and the more pliable Peter O”Donnell was installed as General Secretary of the All-Ireland Workers” Party, a position he occupied until his assassination in 1976 …

When the U.S.S.R. fell in 1991, Britain and Ireland had been under Soviet control for forty years. Those were years of hardships, shortages, and isolation from the main currents of world events.

The former imperial power was reduced to its home islands. Hong Kong was returned to now-communist China; Gibraltar, Singapore, and Aden were annexed as Soviet naval bases; the rest of Britain’s overseas possessions became independent.

Living culture stagnated. Only the novels of Graham Greene (President of the Writer’s Guild throughout the occupation) are now regarded as having literary merit. Exiled writers fulminated against the rÃ©gime from the U.S.A., Canada, and Australia, but their works were hard to obtain in the British Isles, and are now generally grouped as products of the exile nations. With zero immigration, the multicultural revolution that swept the free nations of the West from the 1960s onward left Britain and other Soviet satellites untouched by diversity.