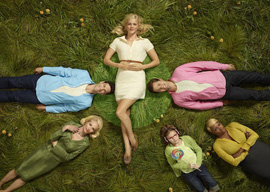 In 1966, Bruce Lee threw himself (literally) into the role of Kato, the Green Hornet’s sidekick, when he costarred in a TV series based on the Silver Age comic book. Alas, the show was canceled after one season. A prodigal Lee skulked back to Hong Kong to shoot a low-budget film, certain that his Hollywood career was over before it had even begun.

Lee’s self-confidence soared back to its normal (that is, above-normal) levels when he was greeted like royalty upon arrival. The Green Hornet had developed an enormous cult following among the locals. They called it The Kato Show.

I was half-hoping we knuckle-dragging right-wing homophobes were getting a Kato Show of our own this fall when NBC announced a sitcom called The New Normal. Sure, it’s about two white upper-middle-class gay guys who hire a surrogate to have their baby, but I was prepared to overlook that on account of one secondary character, “Nana Jane.”

As the surrogate’s overbearing, opinionated mother (played by Ellen Barkin), Nana Jane was described promisingly as “racist” and “homophobic” in The Hollywood Reporter.

“I spend many hours a day on right-wing websites and can report that nobody’s mentioned the show even once.”

One gay entertainment reporter tsked that in the pilot episode, the character “calls a lesbian couple “gay peacocks.””

Another described Nana Jane as “Rush Limbaugh in a Cindy McCain suit” who skewers “gays, Jews, Asians, and blacks.” Jane refers to the show’s homosexual couple as “candy-packers in that Sodom and Gomorrah fudge factory” and moans, “I feel like I just ate a black and gay stew right before I fell asleep.”

So naturally, I wondered: Holy hell, what time is this on?

Surely this was how Oprah Winfrey’s neighbors felt when Diana Ross and the Supremes debuted on The Ed Sullivan Show. Winfrey recalls people yelling out their windows, “Come quick! Black people on the television!”

I thought back to Ãber-lib Norman Lear’s mortification when his straw-man villain Archie Bunker was embraced as a hero among those who”d soon be calling themselves “Reagan Democrats.”

And remember when liberals during the Bush years adopted The West Wing as a consoling, alt-reality White House, sucking on the show like a baby with a soother?

Was television history about to repeat itself?

Previously, the Moms had targeted JCPenney (after they hired lesbian comedienne Ellen DeGeneres as a shill) and Oreo for celebrating Gay Pride Day/Week/Month by posting a rainbow-colored cookie on the company’s Facebook page.