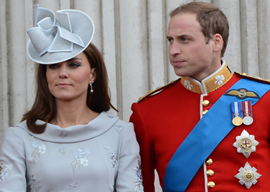 The Duke and Duchess of Cambridge

C.S. Lewis once said: “Where men are forbidden to honour a king they honour millionaires, athletes or film-stars instead: even famous prostitutes or gangsters.” He wasn”t entirely right.

Some 230-odd years ago the United States threw off the British monarchy and expelled its loyalists to the far corners of the empire. Now in 2014, King George III’s successors are adored by those millionaires, athletes, and film stars. LeBron James came off as awestruck when he said of the Duke and Duchess of Cambridge’s attendance at an NBA game: “It’s a huge honor. The stuff that you read about, people like them are only in books growing up. And to hear that they”re coming to town to see me play and they want to see me do what I do best, it’s a huge honor.”

When the Cambridges met Beyonce and Jay-Z, the latter could be seen glancing around nervously, careful not to break royal protocol. And wasn”t President Obama’s smile a bit wider than usual? Piers Morgan’s prediction seems to have been spot-on: “When [the Duke of Cambridge] departs, President Obama will shake his hand and feel very grateful that he was able to bask, albeit briefly, in the reflected glow of his guest’s beloved VIP wattage.”

Don”t be mistaken: this isn”t mere stardom. I”ve seen receptions like this once before”for the same royal couple, earlier in 2014. Along with grave state engagements, like visiting the victims of wildfires and paying their respects at war memorials, the duke and duchess also took time to visit youth groups, local artists, athletes, and community leaders, and to pose for endless photos with their public.

That was in Australia, which is still a constitutional monarchy. The similarities far outweigh the differences. When the Queen of England and her heirs visit the United States, they don”t come as foreign dignitaries. Imagine Angela Merkel (or her grandson, for that matter) being so received. They don”t rightly come off as pop stars either. Even a beloved British movie star”Dame Helen Mirren, for instance, or anyone from the cast of Harry Potter“wouldn”t be received with anything close to such a mix of deference and adulation. Nor would Americans embrace any old royal family in like fashion. Majesty magazine’s readership makes up only a small percentage of royal-watchers, most of whom wouldn”t know if the King of Spain passed them on the street. Many of them probably don”t know Spain has a king.

No; the British royal family visit the U.S. as though they were our own sovereign family, in nearly the exact manner they visit Australia and Canada. We”re a de facto constitutional monarchy”or, in a favorite phrase of Australian Prime Minister Tony Abbott, a “crowned republic.” The Windsors are our royal family.

The former spiel (typically peddled by liberals) is readily identifiable through the persistent use of pet names like “Wills and Kate,” as though they were the neighbor’s lovely Persian cats who just dropped over the fence. Their reports cover, almost exclusively, the duchess’s wardrobe. They have spies in Kensington Palace who”d like us to think they carefully open, document, and reseal every box of hairpins and eye drops that finds its way into the duchess’s medicine cabinet.

The other camp (generally conservatives) prefer to hound the nation-at-large like a jealous boyfriend who’s found out you had an amicable conversation with your ex. They”re endlessly decrying those countrymen who trample underfoot the graves of our founding fathers en route to a rally for King George’s great-great-something-grandson.