The Oldest Trick in the Book 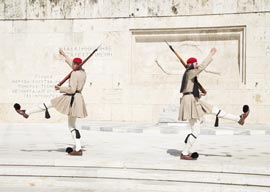 If the government of a country was being threatened by a larger neighboring nation with invasion, and held a referendum whether to fight or give in, and its people voted to fight, but then the government not only gave in but stripped its army of weapons and welcomed the invaders, the government would be called collaborators
and eventually put on the dock for high treason. This is exactly what the Syriza gang has just done to Greece. They were first voted in with the promise that austerity would not last, and that they had a plan to deliver the nation from the chokehold of the euro. After wrecking the economy and the banking system in the six months they held power, and while the clowns showed off on television, they have now thrown in the towel and accepted terms far worse than the ones they were elected to
oppose. This is modern Greece, inhabited by eleven million idiots who fell for the oldest trick in the book. Every electoral promise, every pledge to the voters went down Swanee, in the greatest betrayal of modern times. Yet these criminals will remain in power laughing all the way to the banks that will be rescued by Germany. If this is democracy, I am a banana, I am Monica Lewinsky, I am Ephialtes, the creep that showed the invading Persians the way round Thermopylae where the 300 brave Spartans were resisting. It’s a sad day for Hellas, but a much sadder day for what left wing morons call democracy.