The Once and Future Art of the Cigar 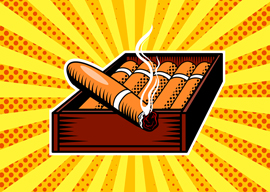 My eponymous father always kept cigars. I remember when I first stole one. I had drained myself at the thought of the new Filipina maid—it was that time of life, before I’d embarked on the more wholesome business of fancying my cousins—and was feeling hollow. I wandered down to the library and poured a scotch. Beside the tantalus was the humidor. I opened it. You know the smell: sandalwood and fermented tobacco. The cigars were phallic, of course, yet virginal. You cannot un-light a cigar.

The one I took outside had a yellow-and-black checkered wrapper. A Cohiba: the most vulgar of all the cigar houses, as I later discovered. You can guess what happened next. The whiskey and the smoke developed an intense tryst for which my young body was wholly unprepared. Whelp-like coughs were soon disfiguring the moonlit parterres. I started to worry about the security guard. Ray liked a drink and had recently loosed off his Smith & Wesson at a noise. He had lost an eye on the beach at Da Nang and his aim wasn’t great (although how you aim at a noise, only he knew). I chucked the damned thing in a fountain and went inside.

I slept about two hours that night, before waking at five with my heart pounding and a mouth like the launch pit of the space shuttle. Still, we Mortimers don’t give up. By college I could handle a cigar better than I could handle a woman. The men who still struggled with them earned a richly deserved sneer. When they learned about sliding off the band, I kept mine on (I have Brit writer Edward St. Aubyn to thank for that). And so on.

Having gotten the one-upmanship out of the way, I settled into cigars for what they are: pure mental and physical pleasure. Like wine or classical music, the power semiotics are nothing but a stockade for the insecurities of small men. The virgin on whose thighs your cigar was rolled cares little which wine you serve with it or the order of your dinner placements. It is true that we epicureans gravitate toward the best. But make no mistake that this is for us and us alone: The eye of the beholder has no business with our pleasure.

Such thoughts were circulating as I sat in the cigar room of my London club (if you don’t already know which one, there is no point in telling you). I was smoking an aged Hoyo de Monterrey and sipping a tart gin and tonic, my favorite match for any cigar. Falling into a fireside conversation, I discovered an amazing fact: People are still starting cigar houses! I had thought that the Cuban brands—like the ch”teaux appellations and the rules of tennis—had been fixed since the first day of Creation. I vaguely knew that the sclerotic hand of Communism had passed over the one area of an economy that does need control—trademarking—leaving these houses open to rip-offs. Also that the Revolution of ’59 had left a diaspora of emigré cigar families, scattered around the southern rim of the Caribbean like the stalks from a dandelion. But these outre-mer cigars always leave one unfulfilled. It was hence with some unease that I realized my friend’s new line sprung from precisely this ersatz tribe.

When he produced one for me to try, I wordlessly cast the faithful old Hoyo into the flames. The skepticism must have been written across my face, as we Mortimers are terrible liars (just ask the taxman). And yet the same honesty soon came to my aid in the form of a smile. The cigar had the distinction not only of being as good as a Cuban, but of tasting original. I was immediately reminded of the moment in 1976 when the French accidentally voted down their own Bordeaux in a blind tasting against our thrusting Californians (being French, they then tried to falsify the results). Had this moment finally come to cigars? I put this to him and he smiled.

“Yes,” he chuckled. “These are the cigars people smuggle into Cuba.” It then transpired that one has been smoked on the summit of Mount Everest, having been transported there with great sprezzatura by one of the company’s backers. Now thoroughly sold, I asked how much the divine little sausages cost. He looked shifty. Here we go, I thought, another “niche-bespoke-bijou” brand designed to fleece us dilettantes out of our unearned income. “The price point is quite aggressive,” he said hesitantly. “Well, at least the bastard’s honest,” I thought. Sensing my panic at the detour into corporate-speak, he quickly clarified: It turns out that in business jargon, “aggressive” means good value.