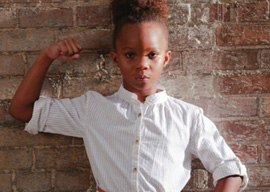 The Twittersphere got itself into a lather this week after the venerable American parody newspaper The Onion ran an unusually nasty Tweet mocking the Oscars:

Everyone else seems afraid to say it, but that QuevenzhanÃ© Wallis is kind of a cunt, right?

The Internet”never a place that’s far off from a good group tantrum at the best of times”immediately exploded with outraged comments and demands for apologies, boycotts, and worse. Some were angry that the joke seemed to target a nine-year-old child. Others were angry that the child in question happens to be black. Some were angry at the mere usage of what newspapers demurely insisted on referring to as “the c-word.”

Then the weird part came”after ignoring the rising tide of faux outrage, The Onion issued an apology. Or at any rate, their CEO did:

On behalf of The Onion, I offer my personal apology to QuvenzhanÃ© Wallis and the Academy of Motion Picture Arts and Sciences for the tweet that was circulated last night during the Oscars. It was crude and offensive”not to mention inconsistent with The Onion’s commitment to parody and satire, however biting.

“We live in a world where people on one side understand satire, and on the other side are those who scream in all caps about the difference between SATIRE AND EVIL!!!”

Then came the even weirder part:

No person should be subjected to such a senseless, humorless comment masquerading as satire. The tweet was taken down within an hour of publication. We have instituted new and tighter Twitter procedures to ensure that this kind of mistake does not occur again.

What mistake was that”making a joke about the vacuous nature of celebrity gossip culture that was actually kinda funny? Or just generally being in bad taste? Because if either of those are considered a “mistake” by Onion staffers from now on, the magazine will pretty much cease to exist, or else it will become a storage space for the kind of cutesy, inoffensive, neutered PC humor that the magazine generally avoids.

First off, let’s get a few things straight, at least for the hapless souls out there who need to have jokes rigorously explained to them in exhaustingly pedantic detail before they can decide whether they should be allowed to find them funny or not:

1) The joke was not at the expense of QuvenzhanÃ© Wallis.
Contrary to what every outraged anonymous commenter shouting for the joke’s writer to be drawn and quartered in the public square seemed to think, the joke was not an “attack” on the nine-year-old actress, it was a joke implicitly at the expense of the People magazine/Perez Hilton mentality of endless catty, infantile jibber-jabber about celebrities. Had the comment been posted in earnest by a private citizen on their Twitter feed the matter might be different, but it was posted in a satirical magazine, hence even the most witless reader should understand that the comment was not meant as a serious attack.

2) Nobody cares if you found the joke funny or not.
Many who demanded the apology insisted the problem resided in the joke not being amusing enough for their tastes, and even Onion CEO Steve Hannah made a point of apologizing for the joke being “humorless” (although I think he actually meant to say “unfunny”). This sort of disingenuous and evasive response is not unlike the intellectuals who declined to defend Salman Rushdie’s right not have his head hacked off with a scimitar because they didn’t really feel that The Satanic Verses was his best work. Not really the point, guys.