The Opacity of Transparency 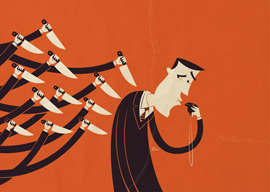 One day after Barack Obama’s victory in 2008, the president-elect’s campaign team launched its official transition website. The administration “will strengthen whistleblower laws to protect federal workers who expose waste, fraud, and abuse of authority in government,” they wrote.

A little more than four years have passed since that pitiful November”during half of which Bradley Manning has rotted in a handful of military facilities”and, boy, does the administration’s claim sound like a ridiculous joke.

Manning’s trial, which is expected to begin in June, was recently turned on its head by the residing military judge. Colonel Denise Lind ruled that Manning can no longer utilize the “whistleblower defense,” and it doesn”t take a legal scholar to understand this decision’s significance, especially when the US government’s charges against Manning include providing aid to the enemy. Lind’s ruling guarantees that the reason Manning communicated with WikiLeaks will remain struck from the public record; it’s her “official” way of ignoring information that is already widely available.

Anyone with an Internet connection can see why Manning did it. We have numerous chat logs detailing his conversations with hacker/informant Adrian Lamo. When asked about his “endgame” in passing along the classified files, Manning explained that he hoped they would spark “worldwide discussion, debates, and reforms.”

“[I] want people to see the truth,” he said, “because without information, you cannot make informed decisions as a public.”

Far from an application to al-Qaeda, Manning’s act was a guide for the country’s evolution toward a more trustworthy and open government. If this is included in the public record, though, the courts look bad. Thus, in accordance with Lind’s ruling, Manning can only testify to his motives after he’s convicted (or enters a plea deal) to mitigate his sentence, putting the courts in a position to appear lenient and sympathetic.

Since Manning’s conversations with Lamo were relevant enough to justify his arrest in the first place, you”d assume that the chat logs” contents in their entirety would be equally applicable to the case. That isn”t how it works. Intelligence-gathering is a one-way street in Washington, DC, and poking around the government’s business will do nothing but get you arrested. Spy on taxpayers, though, and maybe you”ll get a promotion.

After Congress reauthorized the FISA Amendments Act in December, which grants the NSA extensive eavesdropping power, the Electronic Frontier Foundation filed an FOIA lawsuit against the Department of Justice. Its goal was to review the extent to which the intelligence agency has conducted illegal surveillance against US citizens.