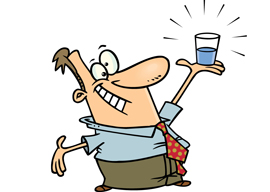 I recently did a duplex book review for a respectable conservative quarterly (relevant issue not yet in print). The two books I reviewed, this one and this one, were of the boosterist type, the boosteree in both cases being the U.S.A. Our country has a glorious future, these authors say.

The editor who sent me the first book”the second was added later”expressed his choice of me as reviewer thus: “We were hoping the author of We Are Doomed would be just the guy to take this book down a peg.”

I get that a lot. Yep, I”m the designated pessimist. It behooves us all, though, to keep in mind what Oliver Cromwell told the Scots: “I beseech you, in the bowels of Christ, think it possible you may be mistaken.”

In obedience to the Lord Protector’s injunction, I”m going to take a break from doom and gloom to ponder the possibility that we may not be doomed. Yes, this is the optimistic column.

“In obedience to the Lord Protector’s injunction, I”m going to take a break from doom and gloom to ponder the possibility that we may not be doomed.”

The end of white ethnomasochism.  The negativity that white people feel toward their own ancestors and culture, the pathetic willingness to drop trou and bend over for bullying agitators from other ethnies, may be receding. No promises here, but there are signs.

We see a significant reduction in the endorsement of diversity when white Americans are exposed to current projections of future demographics.  [“Soon to become a minority in the US, whites express declining support for diversity,” PsyPost.org, October 3rd]

No more staffing up police and fire departments with incompetents and crooks so the quota numbers come out right; no more wafting of magic negroes into high office on thermals of sentimental guilt; no more front-page sob stories in the New York Times about illiterate Guatemalan welfare moochers “seeking a better life”; no more tolerance of black mobs looting stores to protest imaginary wrongs. If whites stop hating themselves, it all goes away.

World Peace.  The dearest wish of every beauty pageant contestant may have become reality.

People will continue to slaughter each other for fun and profit, and some of that will be done by organized war-bands under something approximating military discipline.

That will be happening in cruddy backward places like Africa and Islamia, though, and I believe civilized people will be ever less inclined to bother about it. Why should we? Those places can easily be fenced off, when we choose to do it. Which we soon shall: think of Barack Obama’s failure to get any support for a U.S. expeditionary force into Syria’s civil war.

The prospect of a return to the big old meat-grinder international wars of 1618 to 1945 is retreating fast. For one thing, with sub-replacement fertility everywhere in the civilized world and the corresponding upward drift of median age, there isn”t the manpower. A geezer world is a cautious, restrained world. For another, neither religion nor ideology any longer has sufficient motive power among civilized people.

Nationalism? I hang out with white nationalists. I don”t know one of them that wants to conquer anyone else’s territory. They want to preserve ethnic homogeneity in their own, that’s all. (Chinese nationalists are another story. They already have their Greater China, though; the trick for them will be to hold on to it.)

Abundant Cheap Stuff.  Stuff nowadays is so cheap. I bought a new microwave the other day: sixty dollars! You can pay more for a round of drinks.

Yeah, yeah, moan the pessimists: Seduce the masses with cheap glittery goods, opium of the people, etc. We were happier before the abundant cheap stuff.

Maybe, but nobody wants to go back there. A politician who proposed to take us back would be laughed out of public life.

And we”ve barely started. Molecular-level assembly, 3-D printing, robotized factories … Nobody will want for anything material.