The Parking Garage of the Fates 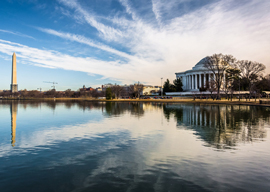 “Of all the gin joints in all the towns in all the world, she walks into mine”: so uttered a distraught and heartbroken Humphrey Bogart in the iconic Casablanca. It’s one of the film’s many lines that get to the core of human relationships. By fate or happenstance, Ilsa Lund”played by the alluring Ingrid Bergman”slinks into Rick’s CafÃ© AmÃ©ricain and sets in motion a love triangle that culminates in a selfless deed to help thwart tyranny.

Casablanca is a fictional story, but the fortuitous event that’s central to the plot is not out of the ordinary. Improbable but important events happen all the time; some without our notice. Many of history’s greatest moments happened by chance, and occurred in inconspicuous places. From the beaches of Normandy to the fields of Gettysburg, human events have the power to transform the humdrum into the hallowed.

This brings up the Arlington County Board’s recent vote to allow the destruction of the parking garage used by journalist Bob Woodward and informant “Deep Throat” to share information on the Watergate break-in scandal. The space is to be replaced with a 28-story, state-of-the-art apartment building and retail space. Construction won”t begin until at least 2017, but the fix is in. One of the most infamous spots of American politics will soon make way for commercialization. Out with the old, in with the new, say the progressive materialists.

“Ninety-five percent of the federal workforce could disband without any real damage done to the country or economy. But as long as it’s here, it’s worth taking note of how small occurrences shape our understanding of life, the state, and civil society.”

I visited the iconic parking spot recently on my commute home, and was struck by the mundaneness of the space. Located blocks from the Rosslyn, Virginia Metro stop, the garage maintains its decades-old look. Walls of chipped paint, broken ceiling lights, barely visible parking lines, and an overall grungy appearance give no hint of the remarkable. The only way to spot the iconic area is by an historical marker placed outside. And yet this is where two men met to trade information that eventually brought down a sitting president. The moments”six, to be exact”were portrayed fairly well in Alan J. Pakula’s All the President’s Men. It goes to show what small wonders can occur in the smallest places.

The Watergate burglaries were an illuminating event in American history. The break-in at the Democratic National Committee headquarters and subsequent cover-up were a lesson in underhanded political duplicity. The public was forced to bear witness to the ugly power-mongering that’s pervasive in any political system. The fallout caused the first president in the history of the republic to resign. Dave Gilson of the lefty mag Mother Jones calls it the “mother of all White House scandals.” Four decades after the event, Woodward and his colleague Carl Bernstein described the whole escapade as turning “[Nixon’s] White House … into a criminal enterprise.” Political strategist Roger Stone claims the burglary and cover-up were all an elaborate ploy to intimidate President Nixon into not looking more closely at the Kennedy assassination.

Whatever the take, the episode was burned into the American psyche as a prime example of abuse of authority. Every presidential scandal since has been compared to Watergate. Every nefarious chief executive is compared to Dick Nixon. For such a pivotal and referenced event to have been sparked in a lowly parking garage, by a secluded conversation between two men standing under dimmed lights, shows how people can create significance within a place that establishes ties to both the future and past.

Of all the cities in the nation, Washington, D.C., with its immediate environs, is the deepest in historical importance. The grotesquely sacrilegious monuments, the puerile exhibits within the museums, the ostentatiously-built neoclassical bureaucratic monstrosities”most of the District is a tribute to its own history of aggrandizement. It’s only in the little places, far removed from the shadows of the Lincoln and Washington apotheoses, that real moments of lasting impression are made. The swaps of journalistic scoops in classy restaurants, the sexual quid pro quos that either enhance or destroy careers, the backroom deal-making to ensure reelections; these ephemeral events end up defining the rooms, hallways, tables, and meeting spaces we normally take for granted.