The PC Gods Must Be Crazy 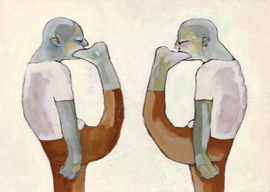 Every time a human sacrifice is made to appease the gods of political correctness, the Sane Community yells questions such as, “Wait! What exactly did the person do that was so wrong?” and “What parts were factually inaccurate?” and sometimes “Are you sure it wasn”t just a joke?”

To ask such questions is to miss the point. Political correctness isn”t a political belief where people want to stimulate a discussion and get to the truth. It’s a totalitarian religion dedicated to the exact opposite. They hate hatefacts and want all sinners to be burned at the stake no matter what the collateral damage. The unfortunate thing about their holy war is that it’s virtually nothing but collateral damage.

My colleague Chuck Ross just explained why Naomi Schaefer Riley shouldn’t have been fired. The same could be said for Brett Ratner, Juan Williams, Rick Sanchez, and the “Chink in the Armor” guy, but despite this barrage of well-publicized examples people keep saying political correctness is “sooo 90s.”

“The unfortunate thing about their holy war is that it’s virtually nothing but collateral damage.”

Sorry, but the witch hunts are alive and well and the PC guillotine has continued chopping off heads since the baby boomers traded their sense of humor for their sense of holiness somewhere around 1980. Here’s ten more you can throw at someone the next time you”re told PC is a paper tiger.

ANTHONY A. WILLIAMS
In 1999, the director of the DC mayor’s constituent services was let go for using the word “niggardly.” This happens so often, the Urban Dictionary defines it as a “word that will get u fired…even though it doesn’t mean anything offensive.”

MELIN
In 1999, this female moderator at The Straight Dope‘s message board was fired because she said people shouldn”t care what race you are and if you”re asked to list your ethnicity on government forms, you should put “American.” To be against racism this much is actually racist. Got it?

DAN ISSEL
In 2001, this Denver Nuggets basketball coach was being harassed by an angry drunk fan who kept yelling, “You suck!” Issel blew kisses at first but the fan wouldn”t stop and Issel eventually lost his temper and reportedly said, “Go drink another beer you fucking Mexican piece of shit.” Issel quickly went from making $2.5 million a year to making $0 a year.

LINA MORALES
In 2004, this Hispanic worker at a Florida telecommunications company made the mistake of having a BLT for lunch. Her Muslim employers were offended by her “flesh of swine” and sacked her on the spot. PC apologists pointed out that she had been warned about pork before and was eating the BLT as an act of defiance. What a bitch.

DAVID LENIHAN
In 2006, when this talk-show host was discussing Condoleezza Rice’s dream of becoming commissioner of the National Football League he made it clear he was all for it. He also said it would be a huge coup”only he said “coon” by accident. Lenihan was clearly mortified by his mistake and within seconds he told viewers he was “totally, totally, totally, totally sorry.” Apparently four “totallys” weren”t enough, and he lost his job anyway.