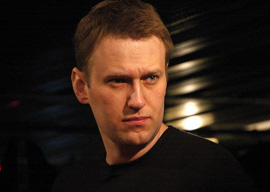 On the Monday after the Russian Duma election, thousands gathered in Moscow and other cities to protest election fraud that was so blatant, even many formerly sympathetic Western observers noted it. Arrests were carried out with surprising mildness while many around the world watched events filmed and uploaded by amateurs.

Just before 4AM in Moscow, news went around that political activist Alexey Navalny had “disappeared.” He’d been arrested and taken to an out-of-the-way police station in Izmailovo, where he was allowed to issue one Tweet and was then held incommunicado. He was supposed to then be transported to Kitay-gorod police station. Somewhere between the two he apparently vanished for a couple of hours while near-panic ensued among his followers. Eventually he “reappeared” in the right police station.

Navalny was given 15 days in detention for resisting police in carrying out their duties. So he was not there physically at the large meeting that gathered in Moscow on December 10, but a statement he’d written was read aloud to the 50 thousand or so protesters. He urged people to keep fighting and said Putin’s henchmen cannot arrest and beat up hundreds of thousands. His message was that we are not animals nor slaves, and we have had enough.

“They are still speaking out in public and to the media, though Russia’s once and future president has made it clear that he is displeased with them.”

Given the weather and the fact that previous protests had been broken up violently, the numbers and the courage are impressive. They are still speaking out in public and to the media, though Russia’s once and future president has made it clear that he is displeased with them.

Putin and his acolytes have over the years managed to exert almost total control over the traditional media. The little that remains outside their immediate influence can be frightened at any time by a notice of unpaid taxes. There is not a firm in Russia unaware of what happens when the government decides that back taxes are owed.

So the ability to oppose the regime and the crony capitalism that supports it has fallen on the bloggers, among whom Navalny is possibly the best known. His blog directs angry and accurate accusations at corrupt large businesses that all have strong links with the state apparatus. He is thus a leading figure in the public anger at the Russian system’s corruption and criminality.

Vladimir Putin’s appeal was that he had apparently restored order in the country after the chaos of the Yeltsin years. The good luck of high oil and gas prices made everyday life for most Russians better than in living memory. Putin had also promised to restore Russia’s status as a great power. In exchange for such prosperity, most Russians seemed prepared to overlook ever-increasing authoritarianism.

Russia has not become a great power that everyone fears. The war in Georgia showed up Russia’s military inadequacy. Estonia and other Baltic states have consistently defied “big brother.” When Russia told NATO not to attack Libya because they would oppose it, NATO effectively replied, “You and whose army?”