The Plight of the Modern Rebel 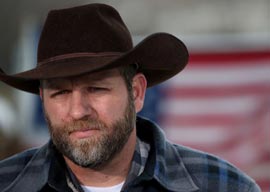 This past Wednesday at 1:30 a.m. a Southern man who goes by the moniker “Saint Negro” tweeted, “We are doing the same thing Rosa Parks did,” under a fake Twitter account called @Ammon_Bundy. Ammon is obviously the son of rancher Cliven Bundy and he’s in Oregon right now fighting for his fellow ranchers the Hammonds, who are back in prison for daring to preserve their land. It’s an inspiring act of civil disobedience torn right out of the Constitution, but the media class doesn”t like it because the Hammonds are white. We want occupations to be done by cool black guys or American Indians. When a young Eric Holder took over an ROTC building with other armed black dudes in 1970, he wasn”t arrested. He became the attorney general and devoted his career to brainwashing the rest of us into giving up our guns. In 1969, a group of American Indians calling itself IOAT (Indians of All Tribes) took over Alcatraz and everyone thought it was totally badass. In both cases, the takeovers were about some loosely articulated idea of injustice. They weren”t very well organized and the Alcatraz occupation was plagued with drugged-out hippies and even the fatal accident of a child. So what? It fit the anti-patriarchy narrative.

The mainstream media, Northerners, students, Madison Wisconsinites, Californians, gays, visible minorities, most women, and liberals in general love sticking it to the man if the rebels don”t look like my dad. This is because modern rebellion has little to do with justice or “the people.” It’s about screaming, “Fuck you, Dad!” and slamming the door to your room. Where Ferguson protesters were provided a “space” to riot even though the guy they were screaming about never had his hands up, the ranchers were called #YallQaeda and #VanillaISIS. Montel Williams suggested the National Guard go in there and “shoot to kill.” The justification being, we attacked black protesters so why not do the same to white ones? Uh, the black protesters were rioters who were burning down their communities based on a rumor. They smashed store windows for a free can of Pringles and some paper towels. Michael Brown didn”t have his hands up. The Hammonds were oppressed by the government, as is just about every rancher and farmer in this country. The EPA regularly bankrupts rural Americans with insane fines for building a pond or draining a marsh. Nobody has done more for environmentalism than hunters because they have an incentive to preserve it, but the government is convinced the free market will bring us all to the verge of extinction.

“Occupy Oregon is an incredibly cut-and-dried example of the government oppressing the people because they want our stuff.”

The story behind the Hammond ranch is shocking. Theodore Roosevelt stole the land from ranchers back in 1908 and the Bureau of Land Management has been encroaching on private territory ever since. The land is valuable and, as with the Bundy land, contains untold resources, so if the ranchers won”t sell to the government, the ranchers get terrorized to the point where they have to basically give away their land for free. The Hammonds refused to sell, so the government kept hampering them until they were eventually sent to prison for arson. This was based on a control fire the ranchers did that prevented thousands of acres from going up in smoke. It’s common practice for ranchers to conduct backfires, but arson is a crime so Dwight Hammond and his son Steven were sent to prison. They were released after serving three months and a year, respectively, but the authorities then realized the charges were technically terrorism and that requires a minimum of five years, so back the ranchers go. Who in their right mind isn”t angry at this point? Where are all the anarchists? Where are all the punk rockers? Occupy Wall Street had some vague point about bankers and capitalism. Occupy Oregon is an incredibly cut-and-dried example of the government oppressing the people because they want our stuff. Ranchers have always used fire to improve their land. They use it to help trees grow. It enriches the soil and is often used to stop fires. A forest fire stops spreading when it hits a big patch of pre-burned land. Calling it arson or terrorism is a bold-faced lie, yet a disturbing number of Americans are taking the side of the government. “No,” chides the Huffington Post, “The Oregon Ranchers” Prison Sentences Are Not “Cruel And Unusual.””

The Bundys were told they couldn”t continue their generations-old traditions of ranching because it endangered the desert tortoise or something. After hundreds of hours of interviews, the patriarch wondered aloud if poor blacks in prison weren”t better off as slaves. The press got their smoking racism gun and that was the end of the Bundys. All the government’s abuse was washed away by one irrelevant pontification. The press is desperate to catch the same “mistake” with this movement. They are dying for the Hammonds to be racist Tea Party rednecks who hate liberals because “commies is nigger lovers” or something. This is why when Saint Negro made his fake tweet, the media grabbed the fire and ran blindly into the snow. CNN followed the account religiously and through his fake account’s direct messages he had conversations with the BBC, CBC, and Al Jazeera. As Negro put it, “When you fool the whole world with a parody acct.”

“Not one person in the media asked to verify it,” the Saint told me on my show (verified via DM). “Even the media people that were on site there…didn”t have the sense to go over to Bundy himself and ask if that was him. Now that’s fucking ignorant.” That’s how bad they wanted it to be true. Shaun King is so devoted to ethnomasochism he has convinced himself he’s black. King stayed up all night writing a rebuttal to fake Ammon that he still stands by today. Where most media outlets were embarrassed by their rush to judgment and have published corrections explaining they were punked, King just went back into his piece and quietly changed it. The header “My Open Letter to Armed White Militiamen Who Compare Themselves to Rosa Parks” became “The Ammon Bundy Tweet Comparing Militia Leader to Rosa Parks Is Not Only Offensive, It’s Laughable.” Within the article, “you wrote what appears to the intelligent eye to be a sleep-tweet. You must”ve rolled over on your phone in your sleeping bag,” became “someone claiming to be you wrote what appears to the intelligent eye to be a sleep-tweet. You, or someone masquerading as you, must”ve rolled over on the phone.” What a fucking tool, and I mean that in every sense of the word.

I told Saint Negro that I see plenty of similarities between Ammon Bundy and Rosa Parks. “I do too,” he replied. “That’s why I wrote that statement.” America was founded on militias who were sick of the government bossing them around. When anyone who doesn”t look like your dad even sort of apes this behavior, we clap like single moms and give them space. However, when someone who resembles Daddy does exactly what the Constitution says we should do, everyone sides with Big Brother and demands patricide. I”ve seen households without a patriarch. It ain”t pretty. I don”t want to try an entire society without them.