The Plot to Kill Maxine Waters 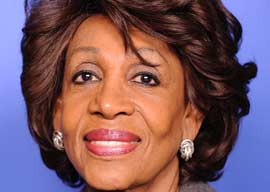 To my knowledge, there is no plot to kill the intellectually disadvantaged California Congresswoman Maxine Waters. But it seems as if she wishes it were so.

Last Wednesday during a hearing before a House Subcommittee on Terrorism and Illicit Finance, “Auntie Maxine” rattled off a litany of alleged domestic terrorist attacks committed by reputed white supremacists that have led to her being spooked about being killed by whites. And it’s a legitimate concern, seeing as how the plush LA neighborhood that she calls home is only 6% black—she’s surrounded by whites at all times. If she were truly that scared, she would move to the congressional district she represents, seeing as it’s only 15% white.

Among the incidents she listed were the 1992 Ruby Ridge standoff in which three were killed. She failed to note that the three victims were a white federal agent and the white son and wife of Randy Weaver, who was a white separatist who wanted to get away from nonwhites, not a white supremacist who wanted to rule over nonwhites. People REALLY need to learn the difference between the two terms, and if the press continues falsely accusing people of being “white supremacists,” people should start suing their socks off.

Waters also, of course, listed Charlottesville and said that the “car ram and attack” killed three. No, you dizzy broad, it only killed one—a white woman. As with Ruby Ridge, none of Waters’s beloved choco-brethren and strong black sistas was killed in this incident.

“To my knowledge, there is no plot to kill the intellectually disadvantaged California Congresswoman Maxine Waters. But it seems as if she wishes it were so.”

When it comes to being killed, the biggest risk to black Americans are other blacks, since black perps account for 93% of black murder victims. To my knowledge, after more than a quarter-century of blaming white America for all that ails blacks, Maxine Waters has never dared mention who’s actually killing black Americans in spades. I suspect this is because doing so would undermine her entire identity, which is based on being oppressed and persecuted.

In her stridently self-righteous and eternally put-upon style, Waters asked the committee:

What can we do to deal with the KKK, the white nationalists, the extremists, the alt-right?…They’re on the internet, they’re Breitbart. If you look at the YouTube, you see how much they want to kill me and others. What can we do?

I’ve actually looked at “the” YouTube, and I didn’t see anyone saying they wanted to kill Maxine Waters. Again, it seems like more of a case where she wants them to want to kill her. If, as seems to be the case, no one wants her dead because she’s so stupid it provides endless laughter, this would undermine her thunderously shrill sanctimony, which has risen to deafening levels since Trump’s election.

By making a public ass of herself again and again since Election Eve, the 79-year-old Waters has of course risen to folk-hero status among defeated progressive true believers who still show zero insight about why they lost the election. Her painfully obvious stupidity and endless factual inaccuracies don’t matter to those who will gleefully shout “YASSS QUEEN!” at the sight of any sassy black lady insulting white men. The narrative they follow is not a reasonable and factual one, it’s an emotional and moral one in which blacks and women are never to blame and white men are always wrong.

Waters has been perhaps the loudest mouth calling for Trump’s impeachment, referring to his alleged collusion with a “Kremlin Klan”—everything is racial to this woman—claiming against hard evidence that the Russians hacked the election and infamously asserting that Putin has invaded Korea. She’s referred to Trump’s crew as “scumbags” and has threatened to tear suspected white supremacist Ben Carson’s “ass apart.” She has referred to the White House under Trump as “the White Supremacists’ House” and wrongly stated that he “refuses to condemn white supremacists & terrorists who showed up in Charlottesville.” In the real world—not the perpetually victimized playground inside Maxine Waters’s skull—Trump called them “repugnant.”

Waters has been in Congress since 1991 and has not for one minute ceased to make everything racial. After the LA Riots of 1992—which she variously referred to as a “rebellion” and an “insurrection” rather than a “riot”—she visited and provided support to the mother of Damian “Football” Williams, the literal racial terrorist who was filmed on camera dancing in celebration after smashing in white truck driver Reginald Denny’s head with a cinderblock and causing permanent brain damage.

In 1998, Waters sent a letter to Fidel Castro pleading with him to block the extradition of Joanne Chesimard, AKA Assata Shakur, a black woman who’d been convicted of murdering a white cop.

Under her giant James Brown wig, her mind seems incapable of admitting that when blacks assault or even kill whites, it can be motivated by racial animus. Instead, it’s “justice.”