The Politics of Topography 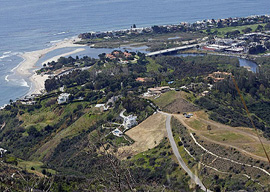 The struggles of even the best-connected California celebrities to nail down every last one of the permits they need to build on their own property helps demonstrate why differences in topography drive Californians toward voting for environmentalist Democrats and Texans toward pro-business Republicans.

For example, George Lucas recently gave up after nearly two decades trying to win the right to build a movie studio on his lovely spread in Marin County. As a farewell gesture toward his Not In My Backyard neighbors, the Star Wars impresario flipped them a rigid digit, announcing he wanted the site to be used instead for low-income housing. It’s an amusing idea, but one even less likely to succeed.

In Southern California, U2 guitarist The Edge (born David Evans) has been battling for a half-dozen years to build five mansions on his 156 acres of ridgeline overlooking Malibu’s Surfrider Beach, an average of one home per 31 acres. His well-heeled neighbors have gone to war to prevent him from taking such liberties with their view.

“Paradoxically, Democratic California is a nice place to be wealthy and white, while Republican Texas increasingly attracts the working class, especially minorities and immigrants.”

California and Texas are the two largest states in the Electoral College, so it’s worth considering the bedrock reasons they vote the way they do. Having lived in both California and Texas, my guess is that their divergent politics are shaped by the shape of their land.

This can be hard to notice, because the facts on the ground are so contrary to the proclaimed ideologies. For example, the traditional spin is that Democrats represent (simultaneously) change, progress, equality, the masses, and minorities. Yet Democratic politicians and fundraisers do very well for themselves in California’s exclusive Whitopias such as Marin County and Malibu, where the locals like things just the way they are and use environmental regulations to keep them that way. Nothing ever changes in Marin and Malibu except that the land gets more expensive.

Paradoxically, Democratic California is a nice place to be wealthy and white, while Republican Texas increasingly attracts the working class, especially minorities and immigrants.

Although California elites constantly claim they want more population growth through immigration, they have devoted extraordinary efforts to keeping Southern California’s coastline underpopulated. Although close to 18 million people live in Greater Los Angeles, only a tiny percentage can actually see the Pacific from their homes.

Malibu, for instance, consists of 21 miles of paradisiacal beachfront with a gloriously mild climate directly adjacent to America’s second-largest city. Yet Malibu’s population in 2010 was just 12,645, up by only 70 individuals over 2000.

That’s only 602 people per mile of oceanfront. In contrast to the intensive developments along the Mediterranean coast, Malibu is almost completely lacking in high-rises.