The Power of a Bad Idea 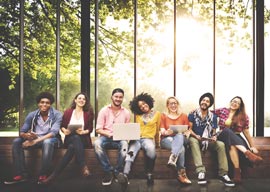 In early 2012, a conservative blogger I had never heard of named Brooks Bayne, who apparently had a website of some sort (and who, according to some, is a white nationalist), published a piece about the leftist boyfriend of Sandra Fluke, the feminist barnacle who made a small stain on the political scene during the presidential election. My fellow GOPs were in a quandary: Bayne’s facts about Fluke’s “commie” boyfriend were solid, but there was a problem”Bayne had loaded down the piece with a long, tangential diatribe about the historical relationship between communism, socialism, and Jews.

My buddies were torn. Bayne’s piece was generally good, but why the hell did he have to put all that Jew stuff in there? Soon enough, a minor war broke out between the pro- and anti-Bayne factions. As the brouhaha raged, I received a typically self-flagellating Facebook PM from my nebbishy friend Boris Zelkin, Emmy-winning Russian-born musician and fellow member of the Hollywood conservative organization Friends of Abe. Boris was raking himself over the coals for having participated in the anti-Bayne lynch mob: “I”ve met Brooks once and he strikes me as an honest guy and I think it’s kosher. He’s being, predictably, called an anti-Semite…. He knew he”d be targeted. Funny, we all know the connection between modern secular Judaism and socialism, but like race in sports we”re never quite free to discuss it.”

I told Boris I thought he was being too hard on himself. Yes, we all very much know that connection, and we all, just as much, know never to mention it. Did Jews “gift” the world with communism and socialism? Sure (to an extent). But my point to Boris was that by now, the roots are irrelevant. Communism has grown beyond its origins and captured imaginations across racial and religious lines, because it offers more than just the promise of free stuff”it gives moochers respectability. Mooching is now an intellectual pursuit, something to be proud of. Communism gives sponges and layabouts a sense of self-esteem. Since mankind will never be rid of leeches, it will never be rid of communism.

“Just as communism and socialism gave moochers “dignity,” censorship is being used to give positive self-esteem to losers who feel unloved.”

Brilliant nutcase Henry Ford once theorized that jazz music was part of an evil Jewish conspiracy to corrupt the white race. He correctly noted the prevalence of Jews in early-1900s popular music. But even if Ford had been right about the conspiracy angle (and, for the record, he wasn”t), it wouldn”t matter. White folks took to the “abandoned sensuousness of sliding notes” quite well, and now they create the “squeaks and gasps suggestive of cave love” very ably all by themselves, without any prodding from Baron Rothschild or Zion’s Elders.

A compelling idea is like a catchy tune; once it takes hold, it no longer matters who created it.

One thing that my former GOP allies and my current, how can I put it, more “fringy” circle of friends have in common is a fear of laws. Every new mass shooting, every new terrorist incident, is met with the rallying cry of “The [insert conspirators of choice] are going to use the tragedy as an excuse to push new restrictive laws.” I don”t fear laws nearly as much as I fear humans in the thrall of a compellingly bad idea. For anyone wanting to curb a particular right, the most desired scenario isn”t to pass a law aimed at curtailing that freedom, but to create a situation, an environment, in which a large enough segment of the population wants that freedom curtailed so badly that it happens organically, no legislation necessary.

If 2015 taught us anything, it’s that far, far too many of today’s college students are downright hostile to the concept of free speech. You probably have to be my age to appreciate how campus speech restrictions have evolved over the past three decades. Back in my day, in the late 1980s, campus speech was “regulated” (censored) by official speech codes. Those codes were written by school administrators and professors. Students”even those who were sympathetic to politically correct censorship”saw the speech codes as “paternalism” from the adults. It was still the “grups” telling the kids how to behave.

When I would lecture (or attempt to lecture) on college campuses in the early “90s, I wouldn”t be met by a sea of angry, protesting students. Rather, I”d face off against a few student-body “elites” (student newspaper editors, student council members, Jewish Student Union and Hillel officials) backed by the admins and their speech codes. It wasn”t organic; it was still the adults pulling the strings. In 1993, when an advertisement for one of my documentaries was set to run in the newspaper of the University of Texas at Austin, none other than the university’s president himself, Big Bob Berdahl, led the charge to ban the ad, and to ban me from campus. Interestingly, it was a group of students who eventually ensured that the ad ran and I was allowed to speak.

But that was then. The campus speech codes are, by and large, gone these days, because they”re not needed anymore. Millennials detest free speech, as recent polls have shown. The kids do the censoring themselves now, and the few advocates for the open exchange of ideas who remain on campus have the practically insurmountable task of fighting a mind-set, rather than an administrative code. A code can be scratched from the books overnight, but 2,000 marching, chanting dunderheads with moral certitude that they”re on the side of all that’s righteous, well…the voices of sanity are going to lose.