The Price of Papal Popularity 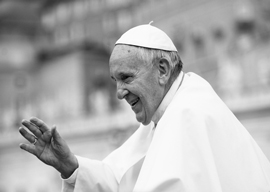 Normally a synod of Catholic bishops does not provide fireworks rivaling the 1968 Democratic National Convention in Chicago, where Mayor Richard Daley’s boys in blue ran up the score on the radicals in Grant Park.

But, on Oct. 13, there emanated from the Synod on the Family in Rome a 12-page report from a committee picked by Pope Francis himself—and the secondary explosions have not ceased.

The report recognized the “positive aspects of civil unions and cohabitation” and said “homosexuals have gifts and qualities to offer to the Christian community.” As for Catholics who divorce and remarry without an annulment, we must avoid “any language or behavior that might make them feel discriminated against.”

“Undignified. Shameful. Completely Wrong,” said Cardinal Gerhard Muller, Prefect of the Congregation for the Doctrine of the Faith and guardian of Catholic orthodoxy.

“Should the church “adapt” to these changes in society?”

He was echoed by Cardinal Raymond Burke, Prefect of the Supreme Tribunal of the Apostolic Signatura. “The document lacks a solid foundation in the Sacred Scriptures and the Magisterium,” said Cardinal Burke. “It gives the impression of inventing … what one Synod Father called ‘revolutionary’ teaching on marriage and the family.”

Cardinal Burke called on the pope for a restatement of Catholic teaching on marriage and morality, saying, “It is long overdue.” The pope has relieved Cardinal Burke of his post.

Voice of the Family, a coalition of international pro-life groups, calls the document a “betrayal.”

Irish representative Patrick Buckley said it “represents an attack on marriage and the family” by “in effect giving tacit approval of adulterous relationships.” The report, he adds, “fails to recognize that homosexual inclination is objectively disordered.”

Cardinal Walter Kasper has been the prime mover of the liberalization of Catholic teaching on sexual morality. When an African bishop objected to the report, Kasper retorted, “You can’t speak about this with Africans. … It’s not possible. … It’s a taboo.”

Hearing this insult, Burke went upside the head of his brother cardinal:

“It is profoundly sad and scandalous that such remarks were made by a cardinal of the church. They are a further indication of the determination … to advance Cardinal Kasper’s false positions, even by means of racist remarks about a significant and highly respected part of the Synod membership.”

In the report voted on by the full synod and released this weekend, the language most offensive to orthodox Catholics was gone. But the synod meets again next year, and the stakes could scarcely be higher for the church and pope.

In his remarks at the synod’s close, Pope Francis mocked “so-called traditionalists” for their “hostile rigidity.”