The Problem With Global Finance 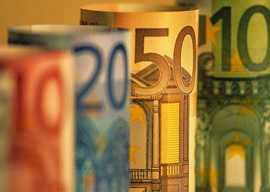 The present European financial crisis seems absurdly complicated to the outside observer as well as to some inside observers. But the reality is fairly simple if you look at it the right way: Leave all ideology and economic theory aside, follow the money, and count things.

In finance, we have this thing called a bond. A bond is a loan’s business end. When you own a bond, you own someone else’s debt. If this sounds like Slavery Lite, that’s because historically it was. We’re a lot nicer about things now: People who make the loans are expected to assume risk and practice due diligence, because enslaving or imprisoning debtors isn’t as fashionable as it used to be. You can force delinquent debtors to declare bankruptcy and liquidate their assets, but you can’t actually own people anymore. You can only own their bonds, at least in Europe.

A fundamental rule in finance is that you are supposed to get more interest for risky investments. The investor deserves something to compensate for the risk of losing his investment. The guy who needed the money has to pay the investor for the risk he is taking. That’s why loan sharks in the “alternative debt” business demand such high rates of return on their high-risk investments. This isn’t an ad-hoc rule; it is something close to a mathematical law.

“For the system to function properly, people making loans must be allowed to fail.”

If you have some money and want a relatively safe, predictable investment, a bond is a good way to go. Bonds are an old-person investment. Old people don’t generally want to take large risks such as starting a company or investing in stocks; they only want to be paid some interest on their acquired wealth. It’s old-people money that goes into making loans, and it is generally young people to whom the loans are made.

This arrangement is the essence of finance and capitalism. Finance is the loaning of money from the old and wealthy to the young and poor. This arrangement has worked very well historically. Energetic young people with good ideas need money to turn their ideas into reality. Old people who have accumulated money tend to be canny and wise and can make smart loans to the right young people. Everyone benefits from this arrangement. Experienced older people allocate resources to productive people on a very decentralized basis. Investors are getting paid for being old and wise and knowing their community, which is as it should be. Stupid investors are penalized by making loans which default, thus relieving them of their burden of wealth. Secretive, inept, or corrupt people don’t generally get loans under this system, which is also as it should be.

The problem with global finance right now is that there are too many old and wealthy people and not enough productive young people, so the financial arrangement’s balance is broken. There are too many people who want to make loans and not enough productive people worthy of loans. Because of this, the money also gets loaned to non-productive people. Worse, it gets loaned at very low interest rates, even to the non-productive, because people who want to make loans compete with each other to give a loan to…somebody. We saw this at work in our housing crisis. We are now seeing it play out in Europe.