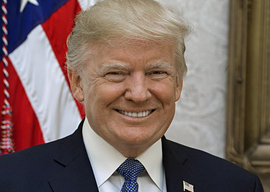 From the Never Trump Republicans to Hollywood to academia, moralistic criticism of Donald Trump has been common ever since he became a serious candidate for the presidency. And certainly, there has been plenty to find fault with. After all, despite the many misunderstandings, distortions, exaggerations, and overreactions regarding the man’s statements, it is indeed true that over the years he has said and done some pretty blameworthy things. What is psychologically naive—though in our time it seems only fitting—is the common assumption that the bad aspects of Trump’s character render him unfit for politics. If anything, the opposite is the truth.

For politics is eminently the realm of evil, and accordingly, the world’s greatest political leaders are not men who were notable for charity, pity, or other altruistic feelings. Rather, they were characterized by sober and exacting judgment, and as occasions required, by a willingness to be harsh and indifferent to morality and feelings. Why all this should have been so was captured forever by Machiavelli:

It is so far from how one lives to how one should live, that he who lets go of what is done for the sake of what should be done learns his ruin rather than his preservation. For a man who wants to make a profession of good in all regards must come to ruin among so many who are not good.

Now, I do not mean to make excuses for President Trump, nor to imply that one must be bad in order to be effective in politics. Still, experience will generally show that, when it comes to dealing with certain very hard problems, a bad man will often be more useful than a good one. On June 20, Trump said to Sen. Lindsey Graham,

“When it comes to dealing with certain very hard problems, a bad man will often be more useful than a good one.”

The immigration question, we see here, is extremely difficult. Indeed, it is tragic since there is only so much we can do for the millions or even billions who would like to make a better life in this country. We naturally feel pity for the migrants of Mexico, Honduras, and other unhappy places. But we are a country, not a charity, and Trump is quite right to conceive of the proper perspective in terms of strength, because it takes a strong will to keep the cold, hard truth in mind and to do what is best for America, rather than allowing overmuch pity to cloud the judgment.

And again, though there is no reason, in principle, why a more moral type of man than Trump can’t be as clearheaded as he is on the matter, still it is generally men like him—men of the world, who are far, far from perfect—who are the least likely to be hindered by moral or sentimental considerations that, however well-meaning, are either not helpful or else downright harmful in context.

Before our time, which is so bedeviled by sentimental delusion, it was well-known that politics is not the place for the most moral men. As Socrates himself said, they belong outside the political realm: There, they are more effective, being less constrained, and indeed less likely to meet with the gadfly’s own terrible fate. It is worthwhile, then, to turn to the past in order to understand this grim truth. Says Emerson:

Our politics fall into bad hands, and churchmen and men of refinement, it seems agreed, are not fit persons to send to Congress. Politics is a deleterious profession, like some poisonous handicrafts. Men in power have no opinions, but may be had cheap for any opinion, for any purpose,—and if it be only a question between the most civil and the most forcible, I lean to the last. These Hoosiers and Suckers are really better than the snivelling opposition. Their wrath is at least of a bold and manly cast….

The communities hitherto founded by Socialists,—the Jesuits, the Port-Royalists, the American communities at New Harmony, at Brook Farm, at Zoar, are only possible, by installing Judas as steward. The rest of the offices may be filled by good burgesses. The pious and charitable proprietor has a foreman not quite so pious and charitable. The most amiable of country gentlemen has a certain pleasure in the teeth of the bull-dog which guards his orchard.

So much for any rosy illusions—here is politics as it is, with no fearful capitulation to how we want it to be. In a world determined by self-interest, in which it is everyone’s most important business to endeavor to survive, the one thing all men respect is not justice but power or force: in other words, the reality and threat of pain. And “this power, to be sure, is not clothed in satin. ’Tis the power of Lynch law, of soldiers and pirates; and it bullies the peaceable and loyal.” Finally, “one comes to value this plus health, when he sees that all difficulties vanish before it.” Thus, “Socialists,” “the pious and charitable proprietor,” “the most amiable of country gentlemen”—all of us, however virtuous, depend on “Judas” and “the bull-dog” because evil must protect the good, and evil must be used to fight evil itself.

To some extent, we can understand this interplay between good and evil as a reflection of the public-private distinction. For it is in the private domain, within the locus of our most intimate relationships—family, friends, community—that the moral sentiments are mostly applied. Beyond that, our fundamental disposition, however unconscious and unavowed, leads us to strive to protect our interests against anyone who could pose a threat to them; and this vast category comprehends most people, and so the public generally. Herein, too, we include our competitors and enemies, both domestic and international.

In politics, men come together to advance and protect their private interests, so there is an important function for a man like Donald Trump, because he is “of a bold and manly cast,” and for all the vices that entails, it yields immense benefits, especially on the world stage. Writing in The National Interest, Dimitri Simes gives an apt overview of Trump’s value in foreign policy.