The Psychology of Modern Celebrity 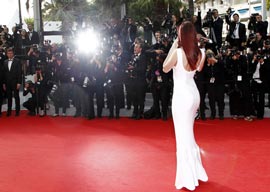 Nothing human is alien to me, I understand nothing that is human: I cannot quite make up my mind which describes my situation the better. But certainly one of the things that I do not understand is the cult of celebrity; it mystifies me completely. It is not that I am uninterested in gossip, provided it is about someone known to me personally, even if but slightly, and is sufficiently malicious, as it usually is. But I cannot imagine what it is like to immerse oneself in the details of the personal lives of people whose fame is ephemeral and with whom one is no more likely to consort than with the upper ranks of the North Korean armed forces.

I was waiting for a train in Union Station in Washington recently and passed the time by the news-stand. There were a lot of magazines devoted to the pseudo-private lives of precisely the type of celebrities of whom I have never heard. The headlines were as follows:

Exclusive: Garth’s back!
Why I chose family over fame.

It’s official for Jen.
3 months pregnant
Joy: The day she found out.
Shock: she had stopped trying.
Big plans: The wedding “ all the details.

Kim’s humiliation
Dumped on her first anniversary:
She begs Kanye to stay: “I can”t get divorced again.”
Kim’s big lie about trying for another baby.
She’s wearing a wig “ stress is making her hair fall out!

“A happy ending from this peculiar point of view is when he chokes to death on his own vomit at a comparatively early age.”

Garth, Taylor, Jen, Kim and Kanye: no need, evidently, to say Garth, Taylor, Jen, Kim and Kanye who, they are assumed to be as familiar to the reader as the persons living with them. And they themselves must presumably want to be familiar to others in this way: for whether a woman or a couple is trying for a baby is something that can be known only to her or to them, unless they want it to be known “ or unless the magazines make the stories up out of whole cloth.

The psychology of modern celebrity is curious and interesting. There seems to be an implicit contract between celebrities and those who confer celebrity upon them. Celebrity is conferred on people almost, though not quite, at random: their talents are minor and their appearance pleasing, but they must not otherwise be remarkable or too far removed in their tastes and manner, at least in public, from those who give them their fame.

In return for this they live a fairy-tale life of the greatest possible luxury, removed from the economic constraints that circumscribe the lives of their adulators, but they must also allow their lives to be examined and reported on, truthfully or not, in all the media. They must agree to be in the public eye as an old-fashioned family doctor was always on duty for his patients.

And of course the eyes that are cast upon them are simultaneously adulatory and sadistic. Those eyes remind me rather of Mrs Todgers in Martin Chuzzlewit, who had affection beaming in one eye and calculation out of the other. The sadism is all too evident in the line about Kim losing her hair through stress and having as a consequence to wear a wig: how the celebrity-conferring and worshipping public will have relished her suffering! It serves her right for having the fairy-tale life that we conferred on her, and that we should so like to have!

On my brief previous excursions into these kind of magazines I have noticed that they often take a malicious pleasure in describing some celebrity or other’s struggle to keep his or her weight down, preferably with before-and-after photographs: before slim, lithe and attractive, after blowsy, bloated and repellent. Celebrities whom the gods wish to destroy they first make fat.

Accounts of alcoholism, or alleged alcoholism, are another favourite way in which the magazines, on behalf of their readership, take their revenge on those upon whom celebrity has been conferred. The former idol’s descent into rehab should preferably be repeated, and the supposed battle lost in advance. It is obvious that, once the celebrity has reached the alcoholic stage, his function is to be a template for the readership’s inexhaustible Schadenfreude, he must never recover and the course of his life should be a downward spiral into utter sordidness. A happy ending from this peculiar point of view is when he chokes to death on his own vomit at a comparatively early age. That”ll teach him to have been raised so far above the rest of us, even if it was only by our own election!