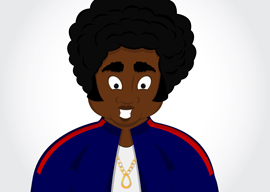 In an interview last week with Taleeb Starkes, podcaster Adam Carolla asked the author of The Un-Civil War: Blacks vs. Niggers: Confronting the Subculture Within the African-American Community a cut-to-the-chase question:

If Starkes, who is black, could wave a magic wand and change one thing about his “community,” what would it be?

There’s no diversity in the black community. It’s pretty much it’s just in our DNA to be one way, and if you”re not that way, you”re not (quote, unquote) “black.” And I would start there, because a lot of these kids are so urbanized, if you bring anything new or different outside of sports, hip hop, those two things mainly, you may be frowned upon, and that’s what I would change. What I”d like to do is get the kids out, let them see other things. Outside of the city. Again, they”re so urbanized, it’s foreign. … It worked for me as a kid. I got to see different things: trees, different place, it worked for me.

The word “urban” effortlessly became the new “black” sometime in the 1980s. If it’s really just a euphemistic code-word invented by whitey, that doesn”t explain why blacks themselves have so eagerly embraced it.

“Black hostility toward Condoleezza Rice and Clarence Thomas has almost as much to do with her virtuosity at classical piano and his passion for RV travel than with the R after their names.”

As that annoying adjective makes clear, blacks fairly boast of their hatred for nature. Their comedy routines are larded with gags about their aversion to camping and swimming. Before Tiger Woods (who, remember, isn”t 100% black) and Obama (who isn”t either), golf”with all that grass and shit”was nothing more than a Richard Pryor punch line.

Now expand this Amish-like orthodoxy to include every aspect of life”education, sex, parenting, music, food, clothing, work, crime”and you get a picture of an African-American culture that is, ironically, more suffocatingly conformist than white America (supposedly) was in the “boring/evil“ “Organization Man”/Invasion of the Body Snatchers 1950s.

(Actually, that’s another, particularly pernicious, myth invented by hippies to glorify their own advent and give their parents the collective finger.)

Black hostility toward Condoleezza Rice and Clarence Thomas has almost as much to do with her virtuosity at classical piano and his passion for RV travel than with the R after their names.

Look at this famous scene from Barbershop, and the hot-footed reaction the old barber gets when he mocks received “urban” wisdom”which, he admits, he”d never do “in front of white folks”:

Yes, it’s fiction, but Barbershop is also one of the most financially successful “black” movies ever, which speaks to its emotional veracity.

The double-barreled subtitles Starkes chose for his book are instructive. The first one points to Chris Rock’s notorious 1996 “Blacks vs. Niggers“ routine”one he stopped performing because, well, white audiences liked it a little too much.

Starkes” dueling subtitles seem to signify a struggle to properly summarize one of the key ideas in The Un-Civil War, one that centers around the word “subculture.”

Because for Starkes, that all too familiar black subculture”hip-hop music and dress; defiantly illiterate slang and dialect; the apparent inability to stay quiet in movie theaters or attend parties without bringing along firearms; the paternity tests on Maury“is not “sub” at all. That culture has become, shall we say, “uber.”

And not because of “the media” in particular or “the white man” in general, but because millions of blacks themselves”of all ages and classes”have embraced the uniform “urban” aesthetic (and, to some extent, the ethos that goes with it).