The Rebel Cow of Predappio 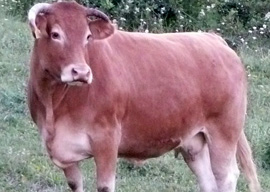 I was wading through the daily mire of newspaper headlines the other day about the deepening euro crisis and the latest rich or famous Italian to be arrested when I saw this: “Mucca inferocita in fuga semina paura“ (Ferocious cow on the run spreads panic).

A cow, nicknamed “Libera” (free) by article’s author, had been on the loose now “for months” in the Apennine Mountains near the small city of ForlÃ¬ where I live, and “quella enorme massa di 800 chili“ (that enormous mass of 800 kilos) was charging anyone who approached it.

It was not that the cow had decided one day to become a bull, or a butch lesbian, or anything so boringly human. The cow’s feelings about its sexuality had nothing to do with it: The cow simply had enough of its life of slavery as a farm animal.

Capable of covering many miles a day, it had now bewitched two other cows from a different farm because, as the newspaper”La Voce di Romagna“explained, it “contagia“ (infects) any other cow it comes across with the urge to be free.

How many other cows in my neck of the woods, or indeed in Italy as a whole, would now heed the siren call to rebellion of this charismatic rebel cow and return to their primeval state? And where does the cow stand on the single currency? Is it for or against the euro?

According to La Voce, not even the farmer who owns the cow could get it to see reason.

So the powers that be in the nearest town, Predappio, had at long last decided to swing into action.

True, the fascist dictator Benito Mussolini was born and is buried in Predappio like a saint. But the town has been run by the communists ever since 1945 when their partisans captured and shot dead the Duce and his mistress and strung them upside down from a Milan petrol station’s girders.

The communists eventually changed their name to the Democrats after the Berlin Wall fell in 1989, but that was all. Given their political agenda, I would have thought that they, too, were at serious risk of infection and the forced return to their primeval state if they should be so foolish as to go anywhere near the rebel cow Libera.

“The cow simply had enough of its life of slavery as a farm animal.”

Perhaps they convinced themselves that the cow was a fascist fifth columnist masquerading as a communist because according to the paper, one morning last week off they all went, up into those hills where there are no roads, just perilous mud tracks, woods, and the occasional field, in their four-wheel drives bristling with weapons.

Amazingly, they soon found the cow and her two sidekicks in a scene described by La Voce thusly: “A sort of big game hunt. The forestale (forest rangers), veterinari (vets), and even the carabinieri (police) and the sindaco (mayor). All of them around Libera, at a safe distance, in order to immobilize her.”

But it was all in vain. They could not get near enough to the cow to capture it, and the only alternative was either to shoot it dead or shoot it with a tranquilizer bullet. But the sindaco, being a leftie and a staunch believer in animals” rights over those of fascist humans, would not sign the order to kill the beast and nobody had any tranquilizer bullets. “The rebel cow has won her battle for freedom,” La Voce concluded, “for now Libera remains where she is, happy to roam the hills, and no doubt in the company of the other two cows.”

I decided to investigate the matter further and so went to La Petit Arquebuse, the bar in the old center of ForlÃ¬ which Giorgio, the sindaco of Predappio, uses as his office because ForlÃ¬ is 10 miles from his fiefdom and he can hide in there from his voters and drink the local Sangiovese red in guilt-free bliss. And lo, there he was.

“All true,” he said with a flash of his eyes toward the very attractive barmaid Claudia. Giorgio is masterful at transforming daily life into show business. “Signor Villa, who owns the other two cows, rang me at seven in the morning! And he told me: “That cow has just charged me and I had to hide under my jeep! It embedded one of its horns in the carrozzeria (bodywork) and lost the horn!” Signor Villa was ringing me from under his jeep, would you believe it, and I was in bed! So I said to him: “What cow?””