The Rent May Be Too Damn Low 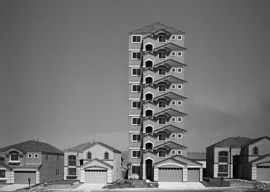 On May 14, 2011, Matthew Yglesias, a prominent Washington, DC liberal blogger and proponent of urban living, was walking home alone after a dinner with fellow pundits when he became the victim of an apparent anti-white racial hate crime. In what sounds like a game of Knockout King or Polar Bear Hunting, “a couple of dudes ran up from behind, punched me in the head, then kicked me a couple of times before running off” without stealing anything. This shameful attack happened merely a mile from the US Capitol Building.

Four decades ago, a popular witticism was that a conservative was “a liberal who got mugged the night before.” Today, the rules of crimethink have grown rigid enough that even getting mugged doesn”t seem to have put much of a dent in Yglesias’s worldview, judging from his new e-book The Rent Is Too Damn High.

This is a downloadable file priced at $3.99 for what’s in effect a long magazine article without the slick graphics that would accompany, say, an Atlantic  cover story. Yglesias offers a lucid technocratic argument against the ever-growing web of government regulations”zoning, environmental, preservationist, and parking”that retard the construction of apartment buildings, especially high-rises, in America’s most desirable locations, even in Yglesias’s beloved native Manhattan.

Iglesias seems to think that if only real estate developers were freed to Build, Baby, Build, we would enjoy a low-rent golden age.

Like David Brooks, Yglesias is a member of what might jokingly be called the Shadow Steveosphere: public intellectuals who find themselves both intrigued and troubled by my contention that public discussion of the patterns we all notice in our daily lives should inform even the most august policy debates.

Much of The Rent Is Too Damn High is thus influenced by my articles on affordable family formation: how the increasing cost of the old American Dream of a home in a decent school district discourages marriage among all but the upper middle class. Hence, I”m sympathetic and mostly impressed.

Still, the fundamental reason that Yglesias’s white progressive friends will never pay more than lip service to his policy prescription is so palpable”but goes largely unstated in his e-book”that The Rent Is Too Damn High is most interesting as a symptom of the growing emasculation of intellectual discourse.

Consider gentrifier’s guilt. This is the oft-expressed complaint among affluent whites moving into DC’s once-black neighborhoods that the diversity that attracted them in the first place is disappearing, and that, really, something ought to be done about it before every black household in Washington, other than maybe the Obamas, has moved to Baltimore.