The Resurrection of English Murder 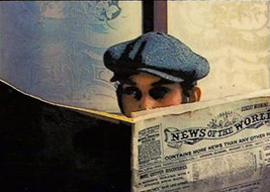 George Orwell was the first to mourn the decline of English murder. In his famous 1946 essay he lamented that modern forensic medicine and the easing of divorce meant there would be no more husband-poisoners like Mrs. Florence Maybrick or lethal serial womanizers like Dr. Crippen.

Surveying the crimes that were eagerly devoured by the public in papers such as News of the World, Orwell said the elegant middle-class criminals of the past, often involving sex triangles or desperate murderous attempts to stop sliding down the class ladder, had gone forever.

Well, if he were alive today Orwell would look around him and conclude that whatever else you can say about modern Britain, the art of murder is in vigorous good health.

And we have our diverse new immigrant population to thank for its modern-day flowering.

Whether it’s the polonium poisoning of a Russian dissident, the honor killings of errant Muslim daughters, or the voodoo dismemberment of “possessed” African children at the urging of unhinged witch doctors, murder has never been so varied.

“Whatever else you can say about modern Britain, the art of murder is in vigorous good health.”

And the most surprising fact about 21st-century British murders is the presence of shame as a motive. If you look around Britain’s sprawling housing estates with so many fatherless children growing up on welfare, you would not think that shame is a word that had much currency.

But things are very different within the Muslim community, where traditional values are in headlong collision with young women who have been immersed in Western culture since they were born. Between four and 12 honor killings take place every year and there are thousands of other “honor” crimes ranging from slaps to full-on kidnappings.

The gruesome case of a 17-year-old Bradford girl named Shafilea Ahmed is typical. A good student, she wanted to be a lawyer, but her family had other plans in the form of an arranged marriage. She first attempted suicide by swallowing bleach, then she disappeared.

The family did not inform the police until a week later and a massive investigation ensued. But despite extensive surveillance, repeated arrests, questioning of family members, and even planting listening devices in their home, detectives failed to get anywhere.

Only when the other sister was arrested for robbery eight years later did the full story come out that Shafilea had brought shame on her family for taking a white boyfriend. The mother and father forced a plastic bag into her mouth and suffocated her in front of their other children.

Her remains were found buried beside a river in Cumbria and in 2012 her family was convicted of her murder eight years after she disappeared. The judge told the parents, “Your concern about being shamed in your community was greater than your love for your child.”

The murder of a 19-year-old Iraqi Kurd girl named Banaz Mahmod also involved a lengthy investigation and took Scotland Yard detectives to Iraq before it was solved.

Banaz was already married but separated when she was spotted kissing another man in his sports car outside a south London tube station. At a clan conference it was decided the stain to the family’s honor could only be removed by her death. But the first murder attempt only landed her in the hospital.