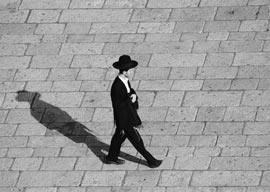 South Park loves taking shots at Hollywood leftists, and never was that done with more skill than in the episode “Smug Alert,” in which liberal self-satisfaction, personified by George Clooney and his 2006 Oscar acceptance speech, forms a giant cloud of “Smug,” a deadly combination of smog and smugness, that threatens to blanket the entire West Coast.

Well, noxious “Smug” is hardly unique to left-wing celebrities. In fact, if you happen to live in the North Hollywood/Burbank section of L.A., I”d recommend not venturing outside without a gas mask on the evening of Saturday, Aug. 29, because a stage 1 Smug alert has been issued, courtesy of Hollywood conservatives. Now, I”ll say this up front”my column this week is colored by my own experiences and motivated by personal anger. No need to call me out on that; I”m copping to it willingly. But I do hope to make a larger point, beyond my own specific beefs.

This Saturday night at the Hilton Universal City Hotel, Friends of Abe, the “underground” group of Hollywood Republicans, is honoring author and columnist Mark Steyn at its annual summer bash (with an opening act by 1990s country has-been Deana Carter, because apparently Lee Greenwood has wash to do that night). I”m certain that Mark Steyn needs no introduction to most Taki’s readers. He’s the brash Canadian expat who’s not too keen on Muslims and Mexicans but quite supportive of white women “breeding” in great numbers. A skilled writer, Steyn gets away with saying a lot of things that would get a lesser intellect in trouble. And having been hardened by skirmishes with Canada’s draconian “human rights” commissions and tribunals, he’s completely unafraid of censors. And good for him. I probably agree with him about 85% of the time, and 100% in any fight that involves opposing censorship, governmental or otherwise.

“Strutting, self-congratulatory conservatives become waiflike Southern belles fainting from the vapors at the mere mention of any criticism of Israel.”

But the ominous Smug cloud of which I warn will come not from him, but rather from the Hollywood conservatives and local GOP functionaries who will be honoring him. I can assure you that the echo chamber of this closed-door event will be throbbing with the deafening cacophony of back-patting and arrogant, self-satisfied, “aren”t we brave?” rhetoric from the assembled members and VIPs. A month after hosting Donald Trump, Friends of Abe is honoring a man whose rhetoric might be too rich for even The Donald. “America has more Mexicans than anybody needs, and then some” is a recent Steyn bon mot. “Why do immigrants rape out of all proportion to their numbers?” is another. Oh, and it should be pointed out that, according to the Ontario Human Rights Committee, Steyn’s fans (no, not Steyn himself, but people who applaud his work) “called for the mass killing, deportation or conversion of Muslim Canadians.”

What bravery the Hollywood conservatives and L.A. GOP will be displaying in honoring Steyn! What a stand they shall be taking against political correctness! Against “minority” pressure groups! Against censorship! And against holding an author responsible for the ravings of strangers who consider themselves fans.

Except…the very people who are honoring Steyn are the ones who banned me because of work I did 25 years ago that raised questions about whether or not Auschwitz was an extermination camp. After five years as a member, I was banned for life from Friends of Abe without being given the opportunity to explain my views, and I was banned solely on the grounds that certain other members were offended. The people who expelled and disowned me were my friends. These were people I”d worked with on a daily basis. They celebrated my political writings, they collaborated with me, they attended my events. Indeed, I was considered a liquor-affected voice of reason in their circle. But it all came to an end when my past as a Holocaust revisionist was “outed” on April 20, 2013, by National Review‘s Michael Walsh (also an FOA member). From that point on, I was worse than persona non grata. I wasn”t just to be ignored, but fought. To this day, over two years later, mainstream sites that hire me are hit with trolling and threats from my former colleagues.

And those who couldn”t find fault with my work faulted me for what people I never knew, “fans” I”d never met, thought of my work. “You might not be a white supremacist, but racists like your work, which makes you just as bad.”

So here’s the bigger point I”m trying to make. My example proves the emptiness of the braggadocio you hear from many conservative pundits about how fearless they are in the face of political correctness: “Mexican immigrants are rapists. Palestinians are a death cult. Black Americans owe whites a “debt” for being enslaved and then freed” (a gem from David Horowitz, an original FOA member). “Women in higher education will lead to the “abolition of man.” White women need to breed more to overcome an invasion of uncivilized darkies. “Sodomites“ are waging “gayhad” against straight people. Offended? Get over it, Mr. Sensitive. We”re being brave and audacious and in-your-face! Oh, but just don”t say anything that might be offensive to Jews. That’s crossing the line. Hey, look how quickly we found our sensitivity!”

When it comes to comments or positions that are viewed as offensive by large segments of the black, Latino, Muslim, female, or gay communities, the conservative line is “Let’s be fearless, impudent little outlaws, and let’s not be cowed by those who cry “hatred” or “racism.”” And indeed that would be a brave stance, if it extended to material considered offensive to Jews. And this applies to issues more current than the Holocaust. Strutting, self-congratulatory conservatives become waiflike Southern belles fainting from the vapors at the mere mention of any criticism of Israel (and I”m saying this as a Jew and a die-hard Israel supporter who, in 26 years as a published writer, has never written a negative word about the Jewish state). The easiest way to take down a pesky “antiwar” libertarian in GOP circles is to find something in that person’s record that’s critical of Israel. All of a sudden the bold, brassy, “I don”t care who I offend” conservative pundits bring out their parasols and lace fans: “Oh, I do declare, I am evah so offended by such distasteful churlishness.”