The Rise of Putinism 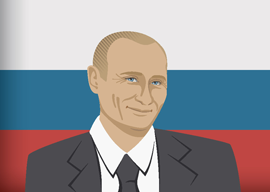 So ran the page one headline of the Financial Times on the victory of Prime Minister Shinzo Abe in Sunday’s elections.

Abe is the most nationalistic leader of postwar Japan. He is rebooting nuclear power, building up Japan’s military, asserting her rights in territorial disputes with China and Korea.

And he is among a host of leaders of large and emerging powers who may fairly be described as the new nationalistic strong men.

Xi Jinping is another. Staking a claim to all the islands in the South and East China seas, moving masses of Han Chinese into Tibet and Uighur lands to swamp native peoples, purging old comrades for corruption, Xi is the strongest leader China has seen in decades.

He sits astride what may now be the world’s largest economy and is asserting his own Monroe Doctrine. Hong Kong’s democracy protests were tolerated until Xi tired of them. Then they were swept off the streets.

“If America is a better country today than she has ever been, why are so many, East and West, recoiling from what we offer now?”

Call it Putinism. It appears to be rising, while the New World Order of Bush I, the “global hegemony” of the neocons, and the democracy crusade of Bush II seem to belong to yesterday.

Narendra Modi, leader of the Hindu nationalist party who was denied entry into the United States for a decade for complicity in or toleration of a massacre of Muslims is now Prime Minister of India.

“Members of the rightwing Rashtriya Swayamsevak Sangh,” the FT reports, “the Organisation of National Volunteers that gave birth to the Bharatiya Janata party headed by Mr. Modi—have been appointed to key posts in the governing party and cultural institutions.

“Nationalists have railed in public against the introduction of ‘western’ practices such as wearing bikinis on the beach, putting candles on birthday cakes and using English in schools—all to the chagrin of fretful liberals.”

Turkish President Recep Tayyip Erdogan is another such leader.

Once seen as a model of the enlightened ruler who blended his Islamic faith with a secular state, seeking friendship with all of his neighbors, he has declared cold war on Israel, aided the Islamic State in Syria, and seems to be reigniting the war with the Kurds, distancing himself from his NATO allies and the U.S., and embracing Putin’s Russia.

Not since Ataturk has Turkey had so nationalistic a leader.

And as the democracy demonstrators were routed in Hong Kong, so, too, were the Tahrir Square “Arab Spring” demonstrators in Egypt, home country to one in four Arabs.

With the overthrow of Hosni Mubarak, the Muslim Brotherhood came to power in free elections, but was then overthrown by the Egyptian Army. General Abdul Fattah al-Sisi is now president and rules as autocratically as Mubarak, or Nasser before him.

Thousands of the Muslim Brotherhood are in prison, hundreds face the death penalty. Yet, despite the military coup that brought Sisi to power, and the repression, the American aid continues to flow.