The Rodents of Amsterdam 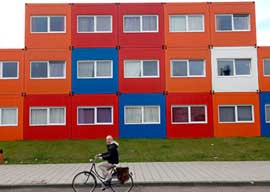 First they came for the loud, obnoxious, drunken neighbors who defecated on my front lawn, tossed their beer bottles through my window, harassed my children, raped my sister, shot my dog, set my car on fire, and spit in my face, but I did not speak out, because I was not one of them.

Last year the city of Amsterdam fielded an estimated 13,000 complaints of “antisocial” behavior, much of it perpetrated by people who already leech off the public dole. The city’s mayor, Eberhard van der Laan from the left-leaning Labor Party, recently announced a roughly $1.3-million plan to relocate some of Amsterdam’s chronic troublemakers into shipping-container homes on the outskirts of town. (Apparently, deportation still isn”t an option.) Offenders would be required to stay in such facilities for a minimum of six months and face steady surveillance by social workers and police. Despite the program’s punitive nature, they will still receive free lodging and healthcare.

“The European welfare state, like that in America, still chugs along blindly unaware that it is unsustainable.”

We want everyone to be who he and she is”whether they are gay and lesbian or stand up to violence and are then victims of harassment. We as a society want to defend them….The aim of this scheme is not to reward people who behave badly with a brand-new, five-room home with a south-facing garden.

Usually people are scared to report problems for fear of intimidation. It’s an upside down world and we want to change it so the people who cause the problems are moved.

The program, which incorporates a team of “harassment directors” who field anonymous complaints made to a hotline, has been compared to a similar suggestion made in 2011 by staunchly anti-Islamic Dutch politician Geert Wilders, who proposed building tuigdorpen, roughly translated as “scum villages,” to house the city’s chronic troublemakers:

Repeat offenders should be forcibly removed from their neighborhood and sent to a village for scum. They will then be put into converted containers as homes. If juveniles are involved, their families should be moved, too. Put all the trash together.

The idea of creating such malefactors” ghettos on Amsterdam’s geographical fringes has drawn loud analogies to leper colonies, gulags, and, but of course, Nazi concentration camps.

Ironically, the term “concentration camp” itself was largely popularized over 100 years ago during the Second Boer War when British forces in South Africa herded over 100,000 Dutch-descended soldiers and civilians into dozens of tented camps.