The Romance of American Blackness 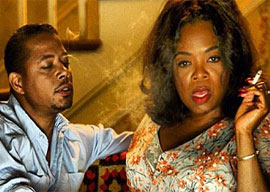 It’s not good journalistic integrity to insult a movie one hasn’t actually seen; and besides, Ms. Winfrey has friends in high places. I therefore decided to go and see The Butler in hopes I might spare myself an IRS audit by finding something positive to say about the movie.

Not to keep you in suspense, gentle reader, but I couldn’t. The Butler is dreck. It’s dreck in a way that will bear a few hundred words of commentary, though, so here goes with a sort-of review.

“The proverbial visitor from Mars, given only this movie to work from, would be baffled why prejudice against blacks exists.”

Sorry, I still don’t know. The showing I caught was at 1PM on a weekday in my mostly white suburb. I counted 36 in the audience. There was just one twentysomething black couple; everyone else was white and old. Movie-schedule-wise, I guess I got the Early Bird Special.

The opening scene of The Butler shows the title character, Cecil Gaines, as a child in 1926 Georgia. He is picking cotton with his mom and dad and many other blacks. Young White Master swings by the field and with a sneer of cold command orders mom off to a nearby hut for a very audible quickie. Dad dare not object, but when Young White Master comes out adjusting his clothing, dad glares at him. For that, YWM shoots dad dead and suffers no penalty for the crime. “Any white man can kill any of us at any time,” the child Gaines is told.

What nonsense! Even in slave times, a white man who killed a black slave in the South could expect some measure of justice. “Ten-year sentences were common, and occasionally the death penalty was invoked,” says Eugene Genovese in Roll, Jordan, Roll. Were matters actually worse in 1926? Could the producers of The Butler not afford a historical consultant”not even one who was, like Genovese when he wrote that book, a Marxist?

Well, well, I guess all is permitted in the promotion of black grievance culture. Stick around: Another movie or two, and we shall see the white folks at dinner served up with a black baby that is roasted, basted, and stuffed.

The Butler goes downhill from there. Gaines ends up in the Eisenhower White House just as Ike is ordering federal troops into Little Rock. We are then taken on a plodding tour of the civil-rights battlefield: lunch counters, Freedom Riders, dogs ‘n’ hoses, MLK, Selma, the Voting Rights Act, Malcolm X, the Panthers….